“But I swear by this song”

-Leonard Cohen, Bird on the Wire

(Side Note: In searching back through the archives of this blog, I am astounded to see that I have only referenced Leonard Cohen once here, but I know that he has had a much larger presence on my Instagram page. I have so many Leonard Cohen stories, there are so many reasons why he touches me, and I literally well up with tears when I think about sharing them, so I will save my real post about the poet/songwriter/human Leonard Norman Cohen for another day.)

This is a post about two birds. One bird in a parking lot. One bird on the wire.

I am equally astounded that I have never shared the story of when I saved a baby bird back in July of 2009, and I suspect that it’s buried in a post somewhere with a keyword that I just can’t figure out, but this story has stuck with me, in my brain, for the past eight years.

I have had the privilege of saving two baby birds in my 32 years:

Once in July of 2009 and the other time on Monday.

I shall start from the beginning. The bird beginning.

In case you are new, or missed my logo, or the background image on this site, I should tell you that I have a thing for feathers. And here is the real reason why.

And so, my love for feathers means that I also love birds. I look for signs, and when I see a feather or a robin I take it as a good omen; a symbol of strength; a reminder that everything will be OK.

I had this really incredible, sign-filled month in July of 2009, the month during which time I became pregnant with my daughter.

I saw a gazillion feathers, including one in that was in a place where it really should not have been.

There is this period of time when you are trying to conceive a child that people refer to as the “Two Week Wait” (2WW); it is the time between when you’ve “tried” and when you can test.

During my two week wait I tried to keep myself busy, and so one afternoon I decided to visit my dad at his office.

I had to park really far away from the building, that day, which was both unusual and inconvenient. However, after my visit, upon returning to my car, I noticed something: a baby bird had fallen out of its nest and was stuck on the ground, unable to move, in a very precarious spot in the parking lot. Now, you must remember that this was a time before iPhones (for me), so I could not just quickly ask Siri what to do or perform a Google search about “how to save a baby bird from a hot, busy parking lot”. Obviously, I called my dad and he cautioned me to not touch the bird, as we did not want its mother to reject it (I thought that was a thing), but also that I had to get it to safety. I took a small box from the trunk of my car, filled it with soft leaves and some twigs, used a small branch to maneuver the baby bird into the nest-like box and I placed it in a spot where it would be free from predators. And I waited. I sat in the parking lot, in the scorching heat of summer, and I watched the baby bird. I was its protector. I would not let it down.

After about an hour, I saw a miracle. The mother bird flew down to the box and found her baby. She did not reject it, but she reconnected with it. I was able to then get both birds back into their nest and I believe that they went on to live a happy life. I believe that because I have to.

I took this experience as a sign, as it involved things including, but not limited to: birds, feathers, a mom, a baby, my trying to put good energy out there into the universe. And, sure enough, 2 weeks later I found out that I was pregnant with a poppyseed-sized baby. She is now almost seven and a half.

Monday morning started off quietly. I had a big work agenda ahead of me. My to-do list was particularly long, as I had been away for most of the weekend, and I had some time sensitive tasks to complete. I planted myself on my living room couch, armed with my little laptop and a large mug of chai tea. I typed away, focused on my writing, when I heard the sound of rustling on my front patio. It sounded like an animal, and I was a little concerned, so I went up to my window, tried to get a look, knocked on the glass and shouted, “Hey!”

When I didn’t see a response, I sat back down on my perch on the couch.

And then, not two minutes later, I saw something out of the corner of my eye. A small thing fell right down the side of the house where the window is, and it looked almost like a black-colored bird. Then, I freaked out. What was going on?!

I called my husband, feeling completely helpless and also a little frightened. I did not want to be attacked by a mangy fox or a scary squirrel.

I mustered up my strength and went outside, investigating the area outside of my living room window where I had heard and then seen the action. I had to look closely, but when I did I was stunned. And apparently I was not the only one. A bird was sitting, completely still, perched on the wires outside of our house. I had recently placed lights in the bushes out front and so it had its tiny little claws wrapped around the black extension cord.

Bird on the wire.

Though the bird wasn’t small and looked like an adult robin redbreast, its tail was short, the sure sign that it was, in fact, a fledgling. I started to cry.

My husband helped me to call the local animal rescue organization and they gave me specific instructions as to how to get the bird to them. They said that the bird had likely been in a nest on our roof or on a tree above the house and fallen from the nest while trying to fly. It was a fledgling, indeed, and had tried so hard to soar, but fell. And then, in a state of shock, grabbed onto the wire. I knew that it was alive because I could see its little body breathing and, you know…it looked alive and not dead. 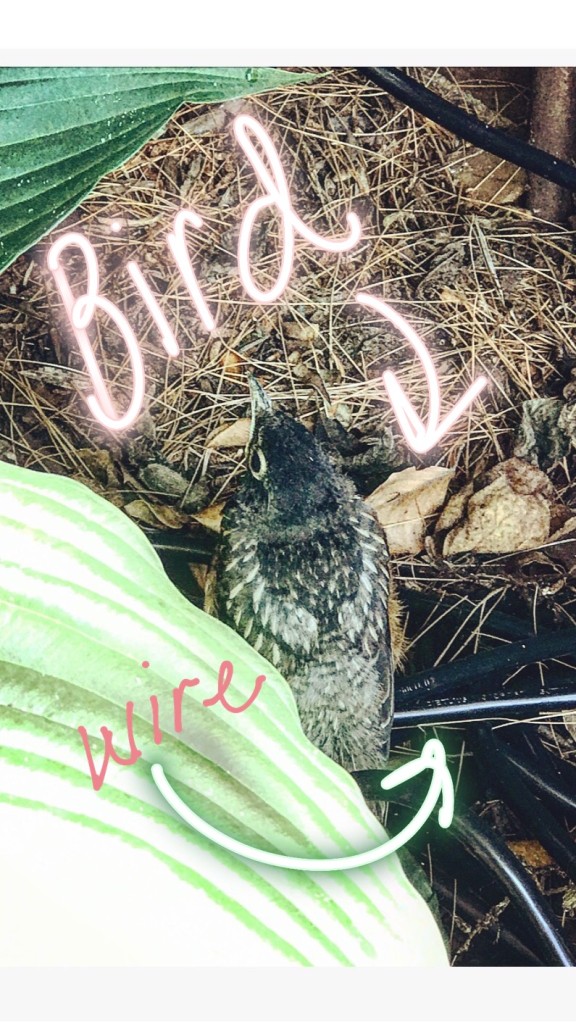 I was to wrap it in a soft cloth, put it in a shoe box and bring it to the animal rescue facility in the city of Phiadelphia.

Still crying, not wanting to leave my precious little stunned bird, I ran inside, threw on shorts, a baseball cap and flip flops, grabbed the softest baby blankets that I could find and then set out to find a shoe box.

This was an issue.

The only shoe boxes I have saved are from the goodies. And do you know what good shoes come in? Thick, glossy boxes. They would not be breathable and I could not even poke holes in them. I made a makeshift box lined with the blankets and ran back outside, my heart racing.

My bird was gone.

Did it get eaten? Was it safe? Where did it go?

As I was standing there, checking the surrounding area for my little baby friend, I was overwhelmed with the memory of July, 2009, and I was so amazed by this coincidence that I decided to capture it on film as a teaser for this blog post. I knew that I would be writing about this profound experience, and so I recorded an Instagram Story, the quickest way to make a video, but I messed up. I made an error on my first “take” and I had to start over.

And here is where the magic happened.

On my second take, I filmed a 15 second Instagram Story and I showed the pile of wire and the little box and as I was filming I heard a fluttering sound and saw a little, black bird with a very short tail fly up into a nearby tree.

I captured my bird on camera as it took its first flight!

I mean…do you want to talk about the symbolism here? Because I think I need not, or else I would be hitting you over the head with it. What I mean is that I think you get it.

I saw my wounded bird. I tended to it. I jumped into action. I didn’t let fear rule me. I saw it falter. I saw it fall. I saw it as it stood in shock, paralyzed by sheer terror.

I watched it take flight.

Had I not messed up my first video, I never would have captured this moment on film. Though Instagram Stories are temporary, disappearing after 24 hours, I was able to save it, and so I have this video, in which I sound absolutely ridiculous, as proof that the universe is, in fact an amazing place.

So often we (I) go through life focused on what is weighing us (me) down.

But when we take the time to stop–pausing even for a moment–we can be met with awe.

And, if you recall, finding awe was one of my New Year’s Resolutions for the year.

This past month has been one of the craziest that I can remember. We have had very high highs and very low lows.

It is so easy to get lost in these emotions, losing sight of the bigger picture. And sometimes it takes a major event to realize that.

But sometimes, all it takes is a tiny bird