It feels soooooo good to say that.

I mean, now that I am trying to call myself a blogger, again, I figured I should blog.

Did I tell you that I wrote my last post while sitting outside at a cafe, drinking a large matcha latte with almond milk, eating a dragonfruit bowl, and wearing sunglasses from Amazon, so, as some would say, I was being

I’ve written before about the power of lists of five,

and so I want to share five things that have made me feel proud as a mom this week.

As moms — humans — we are so often hard on ourselves. When 99% of things have gone well, we can find ourselves dwelling on that other, nagging 1%.

I hold myself to such high, sometimes impossible, standards, and (too often) ruminate on where I’ve been “less than” more often than when I’ve done right by my family.

BUT, in an effort to practice what I preach, and be kind to myself, I am going to share the good.

They aren’t the grand gestures; the photo-worthy moments. They are not things my kids will necessarily ever remember. But, they made me feel more like a mom than most things.

1. Rocking Belle and Beau to the song, “Will You Love Me Tomorrow?”

The other night, before bed, I was doing Beau’s bedtime, and, though her nose was buried in one of her chapter books as it often is these days, I called Belle into his room. “Do you want to do a group snuggle and listen to one song?”

As I played Carole King and James Taylor’s “Will You Love Me Tomorrow,” known in our house as, “the baby song,” as it was the one thing that I always did for Beau, even in my darkest of days. This week, as we curled up in Beau’s bed, I held both of my babies, one of them nine, the other now five-and-a-half, so that they had to position themselves on me by sitting head-to-foot in my arms, as I rocked them, and sang along to this most beautiful song. He rested his head on one of my shoulders, and she on the other. It was a moment that I do not ever want to forget, and do not think I could.

I am NOT an essential oils person, as compared to the true “oily” people of this age. I do not sell, nor have I ever really purchased, oils. I have, though, been gifted several awesome sets, and listened to friends who have fallen in love (and started their own businesses with) essential oils, and my general attitude about them is this: I have no idea if they are as magical as people say, but I like the way they smell, and I don’t think they can hurt.

I know that not all essential oils are created equal, and that some of the “finer” companies do things like employ farmers in Italy to pick the lemons at the exact point at which they are most ripe so that they can be used to make the finest quality lemon oils. Belle is into essential oils, and asked for a diffuser for her birthday, so now her room smells (and feels) like a new-age shop, between the constant flow of aromatic mist, the miniature Buddha fountain she has by her bed, and abundance of unicorns in all forms.

While I have limited knowledge about the true health benefits of essential oils, I DO know that they served to keep squirrels from eating my gorgeous pumpkins this fall, as I had looked up what scents repel rodents, concocted a mixture in a spray bottle, along with white vinegar, and coated them, daily, leaving them both pristine and oh-so-shiny!

This is how I got the idea to make my own bug spray.

Look: in my life, I am all about moderation. In Beau’s lunch today he has two kinds of organic produce AND Double Stuffed Oreos. I would love to expose my kids to less chemicals, but, in practice, like most things, it is a balancing act. When my kids started getting bitten up by all things buggy, and Belle found a tick on the inside fold of her upper ear, I decided I needed to up my game. But, I was very low on the store-bought, chemical-ish spray.

Once again, I turned to the internettes and looked up which oils are good for repelling different bugs, melted some organic coconut oil, mixed them all in a spray bottle, and gave my kids each a few generous spritzes before school.

I will say that they HAVE had less bug bites, and they also smell pretty good (if not QUITE AROMATIC), but, for me, the fact that I tried — and did my best — made me feel good.

And, doing my best is the best I can do.

Do you know what is a hard letter for which to think of an object that Beau can bring into school to represent?

Yoyos, and yarn, and yetis were all in the running, but my kid loves Star Wars. He loves Star Wars in a way that I did not think it was genetically possible for someone who came from my body to love a movie I had once vowed never to see because of my intense fear of space. Name a character, and he can tell you what color lightsaber he or she carries, whether or not they have “the force,”

and many generations of their family lineage (citing specific movies as his sources).

Belle and Kenny were both gone for the day, and so I had to figure out a way to get YODA to Beau’s class for him. Since we do not have a Yoda stuffed animal or figure, and since I do not know how to use our printer, I had but one option:

I had to draw Yoda. Kenny is a fantastic artist; Belle is incredible. I…can sing. Fine arts are not my thing.

It is not good. In fact, it is so not good that I would not be sharing this picture if Kenny did not insist upon me doing so. But, it was drawn with so much love. The force was not exactly with me, 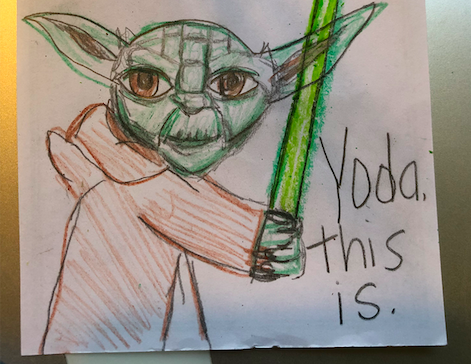 4. Teaching Belle to “flex her no muscle”

This was a big one. But, because it is also personal, I will keep it short. Belle is a people-pleaser, and an empath, and it can be a conversation. She feels everything so deeply, and also wants others to be happy.

Belle likes to say, “yes” to people to please them (I have NO idea from where she gets this) and so we are working with her (with the help and support of her AMAZING school team) to flex her no muscle.

This week, she did. I am so proud of her.

You may remember my slight obsession with my greenhouse garden. I went from having the blackest black thumb, to now having a thumb that is shiny, green, and smells like fresh basil. Every mother’s day since we moved to our house, my dad (an avid, talented gardener) takes me to the plant store and we pick the plants for my vegetable and herb garden. Last year, I grew five kinds of tomatoes, three kinds of peppers, kale, cabbage, two types of mint, two types of basil, lavender, strawberries, and so much confidence. Few things made me happier than flitting out the back door to the greenhouse while cooking dinner to grab some tomatoes off the vine, or fresh greens for a salad.

It became my sanctuary. Watering and tending to my plants became a form of therapy.

While I also appreciate my beautiful outdoor garden spoils, I do not do outdoor digging type things. Why? Because I do not like worms. I have never liked worms, but after an unfortunate incident involving hot cocoa and a peach in high school, I cannot even think of them without getting squeamish. See???

And, wouldn’t you know it, guess what Belle just loves? Worms.

This week, a package of 1,000 worms were delivered to our house, via FedEx, and Belle and Kenny set up the beginnings of this whole operation IN. MY. GREENHOUSE.

Right now, along with the remaining kale and budding new strawberries, my sanctuary now houses one thousand “red wrigglers” which I am told is their actual name, and not just a pair of descriptive adjectives that make me want to puke.

There is a whole method, and procedure, to this worm farm thing, and I would write about it but I need to eat lunch soon and cannot afford to lose my appetite, BUT I did notice a large magnet on the side of our fridge that explains what makes for good (and BAD) worm food. I get to compost, which is something I have wanted to do for a while. I just did not take the whole “red wriggler” aspect into account.

So, while I am not a worm-lover, I will always try to be one hell of a host, so I have been collecting the proper fruits and vegetables, saving peels, letting things ripen and rot accordingly, tearing up an egg carton, and, today, I will put my large container of worm treats into a blender, which is, apparently, the way the enjoy rotten fruit the most, and I will hand it to Belle to put on top of the things in my greenhouse that shall no longer be named.

I cannot invite anyone into your home without at least offering them a drink or snack. Come on, now.

(This is definitely a big mom sacrifice, and therefore, something of which I am proud!)

See? None of the acts above were so momentous

and had I not just typed them up to live on the internet forever, they would have likely been soon forgotten by my kiddos, if they have not forgotten them, already.

But, they mean something to me. They show that I was able to go the extra mile – or even inch – for my kids, even when that step was far outside of my comfort zone. That my love for them transcends all else, and that I adore them, and cherish them, up to the moon, and stars, and galaxies far, far away.

I can beat myself for all of the ways in which I have failed this week, but, instead, I am celebrating the good.

So, I will raise a glass to this week as a mom…

because, FWIW, on Wednesday, at lunch, I ordered an Aperol spritz for the first time (to go with my avocado toast) so who is an aggressively basic blogger/proud mama now?