(Go vote! Even if your kids are off of school, I urge you to vote! However, NOT THE POINT OF THIS POST!)

I am writing to tell you that, before noon today, I earned a varsity letter on my mom jacket.

Let’s start at the beginning:

This morning, I woke up before 7, which is unusual for me; this was not a natural rousing, however; rather, my phone buzzed. It was my daughter, texting me.

Did you catch that?

Last night, as a very special reward for a display of outstanding bravery, my husband and I decided to give her my old, wiped iPhone with a new iCloud account, so that she can: use the sound machine, listen to music, download parent-approved apps and communicate, via the internets, with a handful of people (with whom we control the access). This includes my parents, my sister, Twin, her little camp bestie and us (her dad and me). Basically, she can now text us with funny notes & emojis and FaceTime with her aunt and girlfriend.

This morning she texted me at 6:28am. 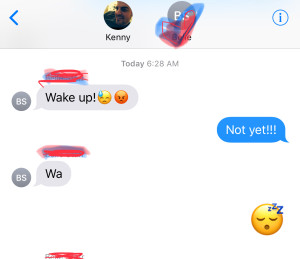 Needless to say we are still working on the guidelines.

In all honesty, I love having my kids home with me. I love the lazy mornings and getting to stay in our pajamas without the normal morning rush of preparing satisfying (and messy!) breakfasts, packing lunches, sourcing “is this warm enough?” coats and the constant quest to avoid the tardy slip.

This morning was extra special, as we had planned a playdate with our awesome neighbors, which also meant that I had to shower and wash my hair (this is a BFD, trust) before 10am.

I enjoyed my hot cocoa and saw that my glasses had been cracked and took part in the latest #photochallenge that is popping up all over my social media. 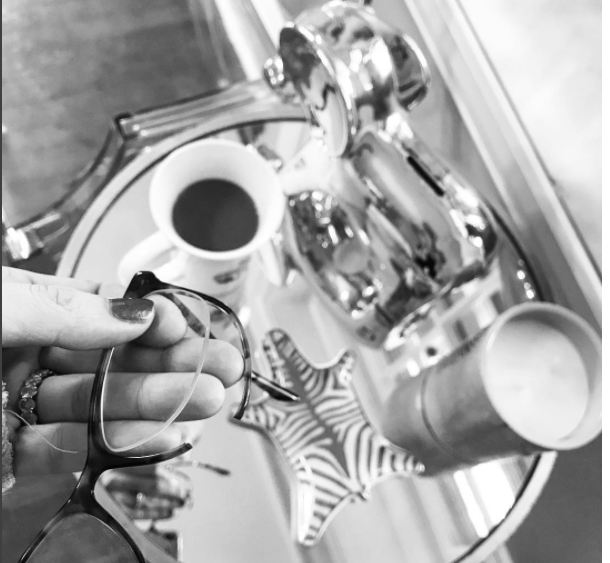 It was wonderful, truly, to host the playdate. They are all really good kids. But, for me (for anyone? Please tell me that it is not just me!) it can be a bit challenging to host FIVE kids, ranging in age from 4-9, all by myself.

I had to manage many different needs that spanned different ages and genders, and it was all going OK, until my son decided to go to The Dark Side. He and his little buddy wanted to dress up in order to play Star Wars (as if there is any other way to play) and he became obsessed with his costume. Though it was perfect for him for Halloween, today, he was adamant about not wearing pants.

This turned into an epic battle. Even the bigger kids chimed in, assuring him that all people, superheroes, bad-guys and Sci-Fi Characters included, wear underpants. He would not put on underpants.

And so, there was a moment today when I had to yell the words (just so that I could be heard over the noise):

And this was said with complete sincerity and as a desperate plea, and it was not met with understanding nor compliance. Instead it was met with a lightsaber to the head. My head, to be precise. My son whacked me.

This is never OK. Using weapons to harm people is not OK. (We have a major problem with certain weapons in our country right now. However, NOT THE POINT OF THIS POST!)

I could not make this up if I tried.

I settled the four older kids in my daughter’s room so that they could film a Chubby Puppy movie and took my son into my bedroom for a Time Out. But, he was hysterical. He was kicking and screaming and shouting the word, “No!” over and over. It was brutal.

Despite his flailing 40 lb body (and the fact that he had just belted me with a lightsaber), I held him tightly and I said, ‘You are going to calm down, right now.”

And guys, do you know what I did?

I used the sound machine on my phone to play the sound of wind chimes. I took him in my arms and I chanted

speaking loudly and then softly,

And do you know what happened? He calmed down. And apologized.

With mindfulness and a new age chant.

The rest of the playdate was busy but nice. We agreed to and wrote up an agenda of activities. 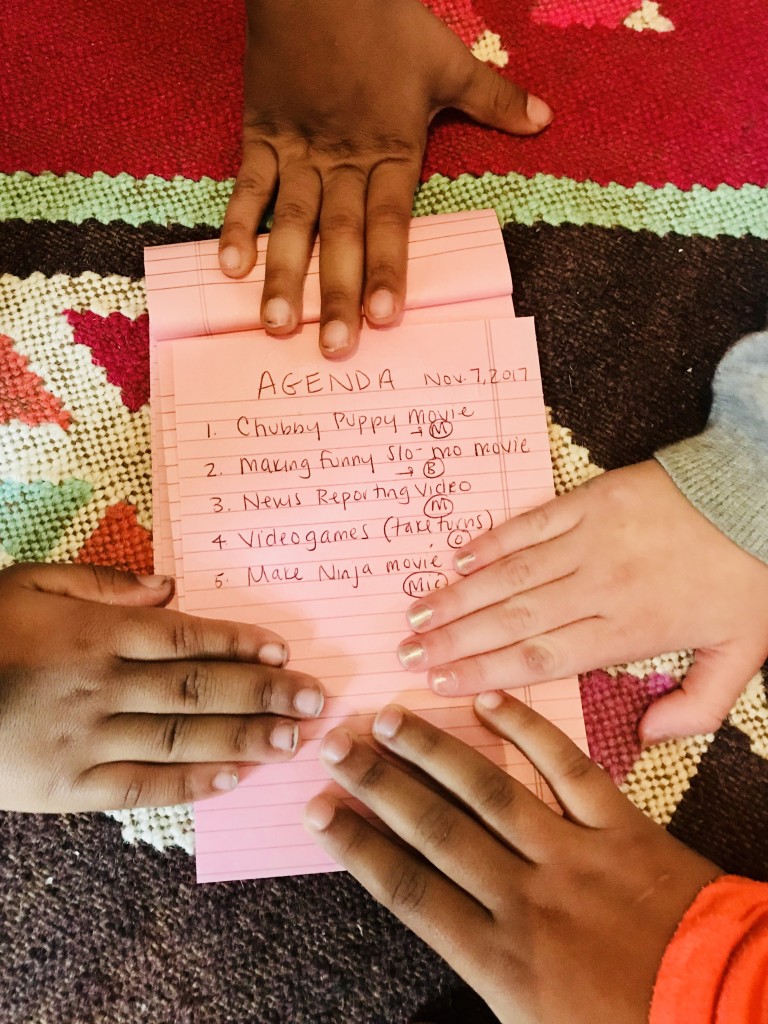 I made a little restaurant for them and they loved the little drink floats that my friends thought I was so weird  for buying for our Halloween party last weekend. 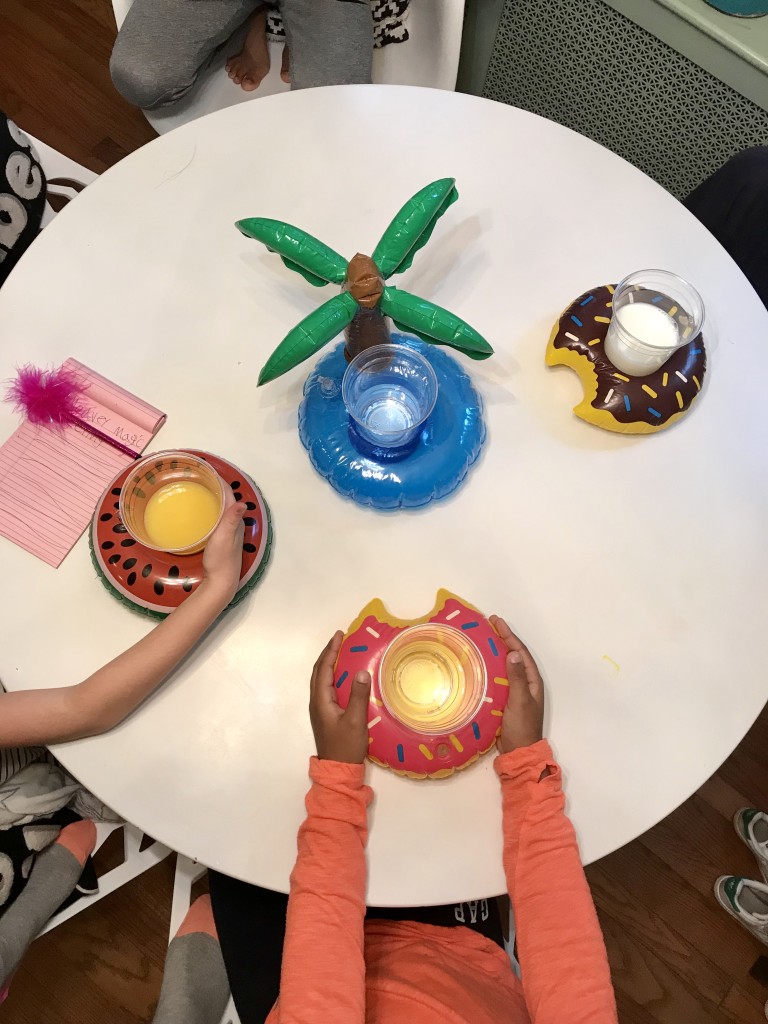 My son returned to his human form.

We completed 2 of the “Agenda Items”

Lola ate the egg off of my avocado toast.

Today was a hard exercise in parenting, but (am I allowed to say this?)

I am proud of myself.

I took care of 5 children, 3 animals and myself. And my varsity jacket is feeling pretty badass,

because I did not do what I’ve grown up seeing other girls do in the movies when they get a date with the cute boy;

I did not put on someone else’s varsity jacket.

I earned my own.

P.S. the image at the top of this post was snapped yesterday and really has nothing to do with this post, except for the fact that I got these kicks in a tiny shop in Paris, when I was 19, and they (/ratty my anklets) make me look 14 from the knees down. And, at 14, in tv shows, one could presumably get a varsity jacket.