I am so proud of the little person he has become.

My son knows what he wants in this world and he fights for it (even if that is the entire box of MOREOS! NOW!)

He is incredibly kind and he loves his family deeply…

but no one compares to his big sister; his “Boppy Girl”; his best friend. He loves her so much and only wants for her to be happy.

My son loves snuggles, Brett Dennen, all the snack foods, Peppa Pig, his “blue soccer jersey with the letters and the numbers“, mechanical things & seeing how they work, Lola, throwing his glasses, books, rainbows, sports, trains, Shopkins and ice cream.

He has an incredible memory and I see him really retaining all that he learns in school. He has a great sense of space, as we will drive by a street, one that he will not have seen in months, and he will point and say, “Oh, look, there’s the glasses store!” or  “There’s my doctor’s office!” and he is always right. His language is beautiful and listening to him talk with his sister ranges from hilarious to heartwarming.

He brings so much joy to so many people.

I love my son with all of my heart, but, as I have shared before, our relationship did not start out in the way that I had planned. I have so much guilt about the little boy who had to be held, and soothed and fed by someone else, as his mother–as I–could not do it.

He has not known the same mother that my daughter did at his age. When my daughter turned three I was strong, still teaching and newly pregnant. I had my act together, looked healthy and her life had been, in many ways, charmed.

We celebrated her birthday with a mosaics party where we made mirrors out of cool tiles and trinkets.

But, for my son, I wanted to do something a little different.

You see, it is very popular for babies, at their first birthdays, to do what is called a cake smash.

Presumably, they are given a little cake for the very first time, and out of excitement, they will smash it, making for the perfect photo opportunity.

This was my daughter’s cake smash when she was 11-months-old. 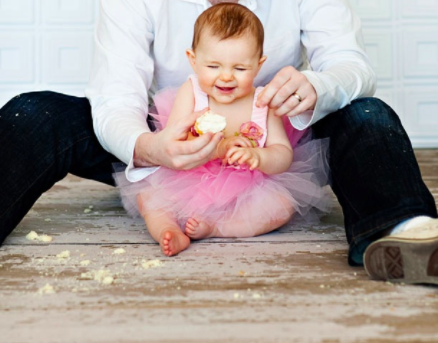 Look at that face.

We did it as part of her photo shoot at Little Nest Portraits, a place that I have written so much about. (It is the luxury boutique portrait studio where I have been taking my children for six years and a partner of mine on this blog.) My connection with them now expanded even further, but more on that, later.

When my son was one-year-old we did not have a photo shoot for him.

We served him cake at his first birthday party but I do not know that we have any real photos.

When my son was one, he did not get to do all of the things that many kids, including my own daughter, were able to do, because I was not capable of doing them for or with him. I was still suffering from severe postpartum depression and it left me paralyzed.

In the past two years we have all grown. We have been mended in some ways, broken in others and changed, for sure.

But now, more than ever, as a part of my own continued healing process, I am trying to focus on my family, my values and my role as a mother.

And so I got an idea for his third birthday.

On Monday, October 24, the day of his third birthday, I brought him to the Little Nest Wayne Studio and Michelle, the amazing lead photographer, did a photo shoot for him.

She laughed with him, joking about monkeys in the cake and in her camera lens.

At first, my son was trepidatious. He now possesses a lot more logical reasoning skills than a one-year-old, so he has been told not to do things like smash cakes, eat off of the floor, eat with his hands or get messy.

Michelle and I smiled and laughed as we watched him approach his cake carefully, at first unsure if this was really allowed. 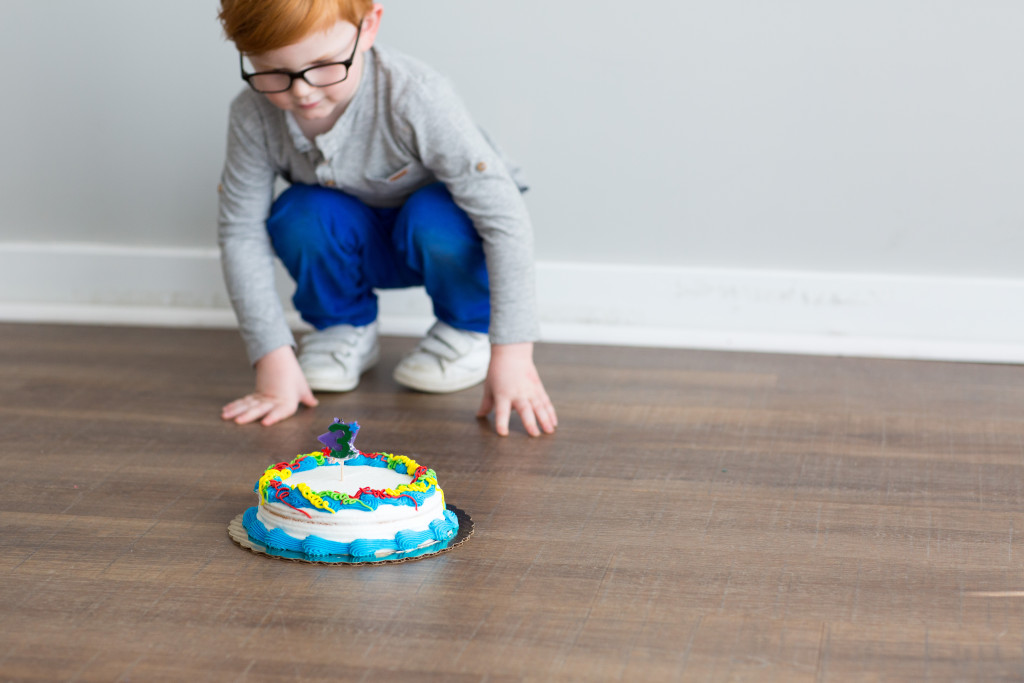 “Smash it!” she said. “Get the monkeys inside!” 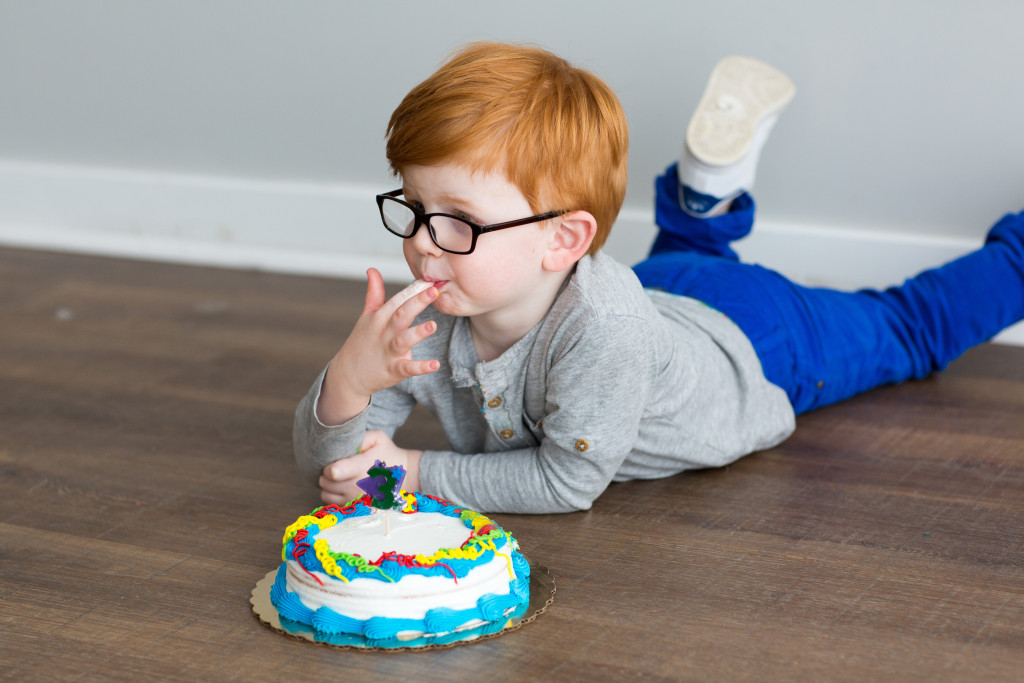 There is only so long that a three-year-0ld can resist a cake. He dipped his toe–or his finger, as it were–in slowly.

And when he finally went for it, all three of us were laughing and having the most wonderful time, watching, with joy, how sweet life can be through the eyes of a child.

Behind my smile was the tiny bit of wistfulness that I always feel when going through a milestone with my little boy.

But here I felt as though I had made things right.

He got his cake smash.

It may not have been in the traditional way, but he smashed that cake, got it all over his face, ate all of the icing, got messy and is still talking about it today, weeks later.

And when I really think about it, in our family we don’t often do things in the traditional way.

We have ice cream for breakfast, dance-parties before dinner and run out, barefoot, in the morning rain.

At 4:11 pm on October 24 I drank a sip of the mini mimosa that I had made for myself. I did a quiet cheers for the time that my son had come into this world three years before. And before you worry, I had a babysitter watching the kids while I worked upstairs.

“This is your day, too. Happy Day. This is the moment when you first held your son.”

I cried as I wrote that then and I cry as I type it now.

I cannot think of a better time to quote the prolific poet Leonard Cohen, whom the world lost this week,

when I try to explain a sentiment that I have been trying to articulate throughout this post and, really, throughout the past three years.

When I look at my little boy, in these photos and in person, this morning, as he just came into our room and asked,

“Daddy? Can I snuggle with you? Can I get under the covers? Can you hold my hand?”

He is radiant, from his golden, strawberry hair to the twinkle in his naughty, little blue eyes.

Son, I hope that you always know that you are loved deeply.

I hope you always cherish your sister the way that you do today.

I hope that you always believe in being a good human being,

but that sometimes, it’s okay to break the rules…

especially when it comes to smashing cake.

I can proudly say that this post was NOT written in partnership with Little Nest Photos, as though they are still, indeed, my blog partners, they are now, also, something more. In September, I began working for Little Nest, Wayne, as Client Concierge for the studio. This role allows me to combine my passions for writing, interior design, social media, forming strategic partnerships, making human connections, playing with kids, seeing tiny babies, eating animal crackers and being supported by an amazing group of women. My connection to Little Nest did not need to be disclosed, but I am proud to share my job there, as it is a most wonderful place. I hope to be smashing cakes there for a long time to come.