This morning, after dropping my daughter off for her last day of second grade, my son and I were engaged in one of our typical drive-to-school chats.

On Fridays, we tell scary stories.

“Mommy, when I grow up can I be a daddy and a firefighter? When I am a daddy am I old? Can I have a boy first, named David, and a girl named Ella? Or Kella. Can I have  girl named Kella?”

I laughed, and said a silent, “thank you” that he was distracted by his dreams for the future, giving me a reprieve from having to tell yet another version of another made up story about yet another haunted but “mostly scary but a little good” place…

until he stopped me in my proverbial tracks.

His thoughts, and therefore questions, shifted to his Nana, my mother-in-law, whom we lost exactly one year ago. Unlike his questions about the broken elevator and baby name options, for these I had no real answers.

“Why did Nana have to die?” he asked. “Why couldn’t she just go to sleep for a long time until she felt better?”

I explained to him that she had a sickness and that now, in heaven, all of the problems with her body had gone away and she could walk and dance and run and play.

“Does she still sleep in heaven?” he continued.

“Yes,” I explained. “She gets to sleep and eat and be with her mom and dad.”

And, for once, I had no words.

This morning, for the second time this week, a loved one called me with sad news.

On Tuesday, it was about Kate Spade and her shocking, tragic suicide. That day, I was bombarded with posts about how we are all fighting unknown battles, how color & sparkle on the outside do not always show the pain under the surface and how to reconcile so many conflicting feelings about our ability, as humans, to save another soul. Is it really in our power? Is suicide a selfish act? Or, rather, can we believe that a sufferer truly believes that the world is better without his/her presence?

That evening I spoke at an event called Hopeful Ever After, an armchair discussion where I told my story and answered questions and an amazing professional postpartum psychotherapist presented from the clinical perspective. It was a magical evening, but also one of the hardest events that I have done. My mom, mommom and two aunts sat in the front row, and as I told my story – the story of when I lost my own will to live – I got choked up and had to pause to wipe my eyes with the tissues that someone surreptitiously slipped onto my seat. I have told my story many, many times, but having to share the details of my darkness – when my own world turned gray – while looking at the women who fought for and ultimately saved my life – was a new kind of hard. I felt guilty and I felt sad. And, as I said last week, I am one of the lucky ones. 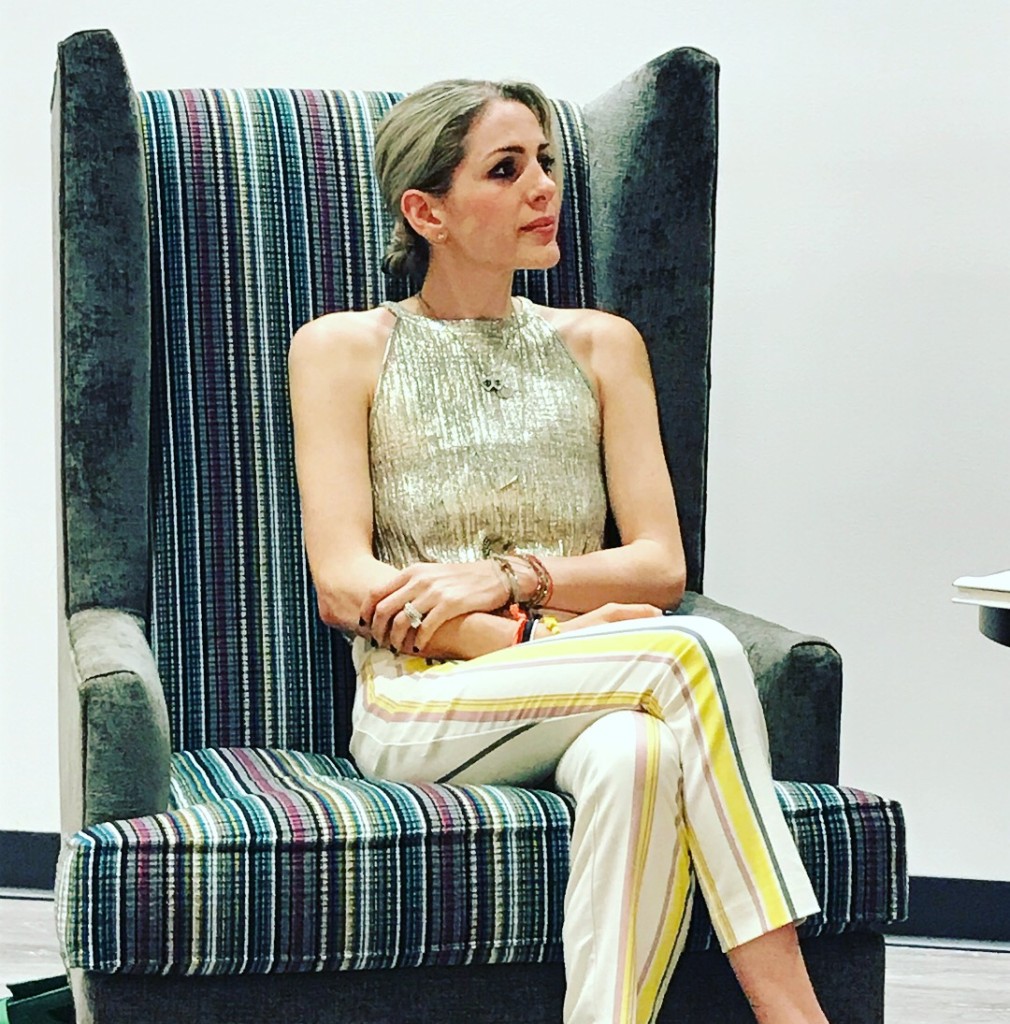 Early this morning, my dad called me from his cell phone. This isn’t a rare occurrence, but also not something that happens frequently, and so I think I always brace myself when I see his number light up my screen before 8am.

“It is so important that you are doing what you do,” he started. “I don’t know if you saw but another high profile person committed suicide.”

“Who?” I asked, breathlessly.

“Anthony Bourdain killed himself,” he explained, somberly. “You should be so proud of yourself for speaking out, Rebecca. So many people are suffering and we just don’t talk about it enough. It is so important that you are doing what you do.” He echoed once more.

My head was spinning. It took me a moment to wrap my brain around the information. I was in the midst of preparing for my daughter’s last day at her new school, which meant tying bows on handmade gifts for her teachers, signing cards, racing from one room to the next to get a sneaker, a hair tie, a glass of milk.

There was one more thing I did not mention to him; one thing that made this call exquisitely painful in a way that I was not ready to share. This morning’s call, during a week of too many of these calls, reminded me of the call I received from him but nine months ago. It was early in the morning. He told me that he had horrible news.

A family friend had committed suicide. A young woman. A loss too devastating to comprehend.

I cannot begin to describe the pain that I felt during her funeral service. I was endlessly grateful that her family members did not dance around the subject. They were explicit in making sure we did not say, “She passed,” or “We lost her,” but, rather, wanted us to say, “She committed suicide,” as the message is so hard and yet so salient.

For a long time, I was (admittedly) scared to write about the topic of suicide on this page. I, like so many, spoke in euphemisms, particularly as I wrote about a death that hit me harder than any other death of someone that I did not actually know: the loss of Robin Williams. I wrote about “My Captian” and how he “lost his battle” because I was too scared to type out the “S” word. Shitty, sad, sobering suicide.

When my friend committed suicide in August of 2016, a faithful member of #teamMEA and a beautiful soul, I decided to stop talking around issue and to do what I have promised to do with so many things: to speak in a scream about things that so many people can only discuss in a whisper.

I have written at length about Hannah Baker, the main character from the show “13 Reasons Why” and how, despite being a mom in my early 30s, I can relate to her so keenly.

(By the way, in light of my most recent Hannah Baker post, I can still relate to her after Season 2. OMG Season 2.)

I write to understand and I write because I understand.

My son is 4.5, and though he has the height of a six-year-old and the mouth of a sailor, I have to be careful what I say to and around him. Also, sometimes, like this morning, he asks me questions for which I have no answer.

“I don’t know, lovey. I think that in heaven the sky is always like a rainbow,” I told him, keeping this world bright for him for as long as I can.

That’s the thing. For people suffering from deep depression this world feels dark all the time. I describe my experience as the world turning gray and then being colorful once more once I emerged from the depths of despair.

When someone is in a deep depression the pain is so great that it is hard to imagine suffering for one more second, let alone trying to fight for one more day. The rally cries for “a brighter tomorrow” are drowned out by the sounds of sadness; pain; darkness; death.

On Tuesday evening, at the armchair talk, a brave woman raised her hand, shared that she was a survivor of a perinatal mood disorder, and asked me a question that I had not previously been asked:

“When did you start to be able to find joy again?”

I paused and thought carefully. I know my story. I know the pain I went through, the darkest of the dark moments, the times I describe myself as having “landed in hell” and yet…

I know it. I know that I lived it. I have triggers that bring me back to the bad times. But, that time also feels very far away. I do not remember a switch flipping and the world becoming colorful again, as if I was Dorothy, going from Sepia toned Kansas to the technicolor Land of Oz. It just happened. And the grainy darkness has faded away, so much so that it is hard to really recognize.

This is why I structure my story as Happy, Hard and then Hopeful. Not because I am some magical unicorn who went from tutu twirling to having vague suicidal ideations to a fairytale. It is because I want anyone who hears or reads my story to know that there is hope, even on the darkest of days. Even when life feels like hell on earth, and this world feels dark, and heaven promises brightness and

maybe, rainbows, there is another answer. There are so many other answers.

I fought. I still fight. This does not make me brave or valiant or strong as compared to those who have also fought and ultimately succumbed. I am just one of the lucky ones.

I drive hours each week to different therapeutic appointments, I make teary-eyed phone calls to friends and family members (I did this yesterday), I struggle and I feel so very deeply. But I know that it is worth it.

It is a hopeful story for a reason.

Whether it is dark in heaven or dark on earth or whether you aren’t sure, please, please, please know that you are not in this alone, that there is hopeful on the other side of hard, that you are not being selfish and that no one will think you are — you didn’t ask for this, this is not your fault, there is treatment for how you feel and it really, really, truly can work.

I don’t want you to, either.