My son is amazing. I feel as though my love for him grows everyday, and that is not a cliche. I am tickled by his cuteness, charmed by his devilish grin and touched when he hugs me and says, “Mom, you’re the best. You are wonderful.”

My son is also incredibly stubborn. He wants what he wants when he wants it. I admire this about him in many ways.

In others, it can be very hard to be on the other end of his “passion”. The kid is 3 years and 11 months old and has no problem trying to outrun me, in an effort to grab a forbidden toy, will scale any surface if it will lead him to Oreos and generally does not like to hear the word “no” unless the sentence is something along the lines of,

“No, you do not have to choose only one toy, you can get as many toys as you would like!”

He is a handful. A delicious one, but a handful, nonetheless.

My son when he is happy:

My son upon hearing the word “no”: 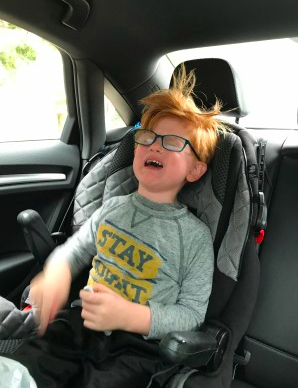 This past weekend was a big one for our family (I’ll save that for another post for another day, but THIS, please!)

Today was for settling back into real life, with things like packed lunches, completed homework and a schedule that was more “functional” than “fun”. I had to adjust, myself, and, this afternoon, on an important work call, I found myself talking about my kids, and admitting that that I had recently told my son about my postpartum depression. Nothing like diving in with both feet.

After school, he and I enjoyed some quiet, alone time together before my daughter got off the bus (with 2 friends in tow, no less, for an impromptu playdate). He was sweet and loving.

But, halfway through the playdate, he melted down. He was the youngest kid by at least 3 and a half years and when they asked him to please turn down the noise on his Kylo Ren lightsaber he refused. 2% of me loves that he is not afraid to stand his ground, even to a girl who is 6 years his senior. But, in this case, it was aggravating. Rude. Loud.

The evening devolved from there. Despite my calm, loving affect (that I worked very hard at maintaining) he was losing it. He was testing me, asking for me to make him one food after another and then refusing to take a bite. Running away from me. Throwing his glasses. Literally kicking and screaming. And so, figuring that he was still overtired from our big weekend, I decided to bring him up to bed at just after 6pm.

He was not pleased, especially since his sister was still downstairs doing homework and, in his mind, eating all of the Oreos. He shouted and I held him. We stayed in bed, silently, as I held him, willing him to fall asleep, when suddenly, after about 10 minutes of this quiet, he started to cry.

“I had the baddest time today, mommy,” he said.

I was tempted to coax him so that he would give a comprehensive answer (like, “Did you enjoy having some small, colorful chocolate candies after dinner? You know, the ones that melt in your mouth and not in your hand?”) but I refrained. I let him speak. At first, he could not think of the best parts of his day.

“What were the three worst parts of your day. You know, when you felt sad or frustrated?” I asked, holding him close to me.

I took notes so that I would remember and also to make him feel validated. He replied:

1. My friend taking the green lightsaber

2. My friend taking my red lightsaber

3. My friend taking my lightsaber and his and making a double lightsaber

He whimpered as he told me of his lightsabers loved and lost.

As he spoke, I traced the scar on his wrist from the mirrored coffee table incident of 2014. Love swelled in my chest. Though his problems may not be enormous to me, they are to him, and I reminded myself to remind myself, so to speak.

“Now can you think of the three best parts of today?” I tried, again.

1. Playing with my friend after school

2. Playing with my superhero Avengers toys

3. Playing with my Bat Cave

“What are 3 things that you are looking forward to tomorrow?” I continued, grateful that he was opening up.

1. Being the door holder again at school

3. Playing with the fire truck toy at school

And number three did exactly what I was hoping that it would do. It got him really talking, regaling me with stories about the games that he has invented with his buddies at school. He loves his one little friend, with whom he has been in class since he was a little toddler, and told me, tonight, “I really like him. He is my friend. And he likes PJ Mask. He also told me that he doesn’t like the Power Rangers movie, but he likes the Power Rangers game. And we have an idea and he wants to be Catboy and someone else who I don’t know yet will be Owlette and I want to be Gekko.”

Once again, I had my sweet boy back. The one who comes down almost every night to “talk about fings” with me, just to get a little extra cuddle time in, as he knows that I will never refuse. The boy who loves his sister fiercely and only wants to sleep with her every night. Who even wants to share his love of Star Wars with her.

“Is there anything else that you want to talk about?” I asked him, preparing to tuck him in, get him “cozed”, as he calls it, and start to do the 27 other things that are on my plate for this evening.

“Mom? Can I tell you one more thing?”

“Of course,” I replied, half hoping that it would be one of his signature, “You’re the best” lines.

“I know one more thing that made me sad. I didn’t like it when the girls told me to turn off the sound on my lightsaber today. It is the Kylo Ren lightsaber and he’s a bad guy, but I really wanted to play it.”

I kissed him goodnight, promising to return for one more snuggle before he fell asleep.

After all of this evening’s lightsaber talk, I decided that I needed to read up a bit. In looking up the actual definition (because, truth be told, when I started to write this post I spelled it “Light Sabor” because that is how little I know), I found that a lightsaber is, “a fictional energy sword…that projects a brightly lit energy blade.” Don’t ask me who uses a lightsaber as a weapon (Jedis? Darth Vader? I have no idea!) but it’s energy blade “can cut, burn, and melt through most substances with little resistance.”

So, basically, it is pretty badass.

And that is when it hit me: My son is a human lightsaber. He is a force of nature; he has boundless energy; when he has his mind set on something, you do not want to get in his way;

He is the kid who, as I type, is singing with his sister, in bed, under the covers, before they fall asleep together, their long limbs tangled together in their slumber.

Today was a bit of a hard day. But, instead of leaning in to the upset we let it out, hopefully freeing him from all of his lightsaber related woes.

Who knows what tomorrow will bring, as if I have learned anything about this child it is to expect the unexpected.

But, now I have a new context. He is a beam of energy. He is powerful. He is strong. He has been through so much and is still tough as nails. He is a lightsaber.

And this little light(saber) of mine?

It is such an honor to watch him shine.