Nice to see you again so soon.

Look. I am going to be straight up with you. This just happened: 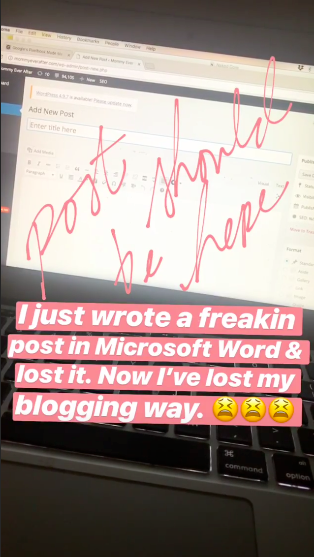 That’s right. I wrote a post, the program stopped responding, quit and did not save my work.

This is now a test for me; a test in brevity.

In my original version of this post I went into the whole backstory; the origin of why I am writing this list of five things.

I would say “long story short” but we all know that is not my language, however, I will say this as succinctly as I can.

Last week, I wrote this big post about feeling as though I am not enough and the response was astounding. You guys are the most compassionate readers and humans and friends ever. I no longer feel alone for feeling “not enough.”

Later, I published an insta story and asked whether you would prefer future posts to be longer, more raw, heavier and therefore published less often OR shorter, lighter and more frequent.

You guys, you were split right down the middle, almost exactly. And so, because I aim to please, and because my last few posts were of the longer, more raw, and heavier variety, I shall post a shorter, lighter post at this time.

I then asked you guys for questions; prompts; things you’d like for me to write about and I got GREAT replies and I will try to tackle them all. For now, though, I am going to go with a hybrid of a general theme I got asked to explore several times over there on the instagram

And if you get that movie reference, fist pound and cheers):

I was asked for so many lists of five, from questions about my favorite things (movies, books…) to pieces of advice and I thought back to my last shorter, lighter post, my five favorite things of the moment, which was so fun to write and share. Those were tangible things; things I was using on the daily (and still am!) and so this will be a bit different.

Though, I was told today that people love “lists of five” and so a list of five you shall receive. I will try to keep it light by focusing on the areas of pop culture/art culture when I can. But I can only promise so much.

That was as much brevity as I could handle and so, without further commentary, I give you

What My Five Senses Are Into Right Now:

I have been watching this show since the first moment of the first episode, and, while it has had its ups and downs, this season is so awesome. Particularly the past 2 episodes. I will not spoil anything for you, but last week’s “Cole” section, or the second half of Season 4, Episode 5, was exquisite; emotional; magical; heartbreaking; genius; allthefeels.

The thing I love about this show is that it shows humanity in a really raw way; that humans are all a little beautiful and a little flawed, and that we can be more forgiving of ourselves and each other. Not that we should but that we can. That we cannot always help who we love. That there is no “pure good” or “pure bad” and that we mostly exist somewhere in the gray. With a show that has the title “The Affair” I might be losing you now if you have not seen it, but trust me; it’s a fascinating character study at the very least. It sweeps you away to different cities and lives. And the aforementioned 30 minutes is worth an investment into the entire series — and if you do and watch it and don’t agree, I’ll buy you a chai and we can talk about it.

Movie — “Call Me By Your Name”

OMG. OMG OMG OMG I wanted to curl up and live inside this movie. It’s stunning. Where do I begin?

Through a weird turn of events, though the film is subtitled for a lot of the scenes (the characters are speaking in French or Italian at times) our subtitles were mistakenly in Hebrew, so we could not actually read what the characters were saying. I am so glad we had this glitch. It allowed me to feel and experience a movie that was already all about feelings and experiences.

I saw almost all of the Oscar nominated films this year and this was, by far, my favorite. It was intense and yet short. It made me feel as though I was there, living the characters’ lives with them in real time; how summer can so often be a time of provocation and power and simultaneously so short and fleeting. The film was also shot beautifully, with some scenes solely captured with one camera fixed in place for the entire time. I love this movie.

2. Sound (to listen to an eclectic playlist of music):

This summer has been marked, so far, by different soundtracks. Different experiences I’ve had have been set to unique songs and styles of music. And since music is the food for my soul, I’ll share with you the last 5 songs (lists of 5) I played on my phone (so I am not counting music that I have played on the record player, to be clear, nor the music I danced my tush off to at the Beach Boys concert last weekend, nor the songs that I have played for myself on the guitar! Woo!).

- “You Are the Best Thing” – Ray LaMontagne

- “Since I’ve Been Loving You” – Led Zeppelin

- “Into the Mystic” – Van Morrison

- “Dancing in the Moonlight” – King Harvest

Well, I think I’ve explained myself a lot on here.

To quote an old blog post in which I quoted Pablo Neruda himself,

(and this touches me.)

My dear girlfriend – I call her Bae – lives in Alabama. She works in the food and nutrition world and is a culinary goddess. You can imagine that it is slightly intimidating to cook for her, but I did, and, in doing so, I learned my new favorite way to prepare and eat eggs.

The short story long is that she came up North and stayed with us on the night of the big concert. She is an incredible friend in that she just shows up (to name just one of her virtues) and she is also an incredible parter with whom to share spontaneous nights out. Sometimes, these involve beer and arm-wrestling, which means that the next morning hearty breakfasts are both welcomed and necessary. I made breakfast for us (avocado toast on sourdough) and when I asked Bae how she’d like her eggs she replied, oh-so-nonchalantly, “Oh, whatever. You can just do them scrambled. Or frizzled.” Apparently frizzled is a southern thing, and it is an amazing thing and I now eat them at least once a day, every day. Here was my first attempt at frizzled eggs, as captured by Bae, and I would not mind having her and the eggs around right now.

5. Smell (literally and figuratively): The Roses

If this time in my life has taught me anything, it is to be grateful for each moment. For our true friends; for health; for our families and kids and the people who have our back(s); those who show up; for the earth and its light and beauty and the way my backyard smells, right now, after it rains. It smells like grass and wood and, a little bit, like the roses from our rose bush.

Besides getting in touch with my warm emotions about my friends and loved ones, this summer I have gotten in touch with my newly greener thumb. I spend every day in our greenhouse with our herbs and veggies (allthetomatoes) and cutting fresh flowers for “just because” bouquets and watering and tending to things in a way that is like free therapy.

This is a photo of my greenhouse was from when it was first planted:

Look at her now! This doesn’t even show the tomatoes, which are now so tall that they reach the ceiling! 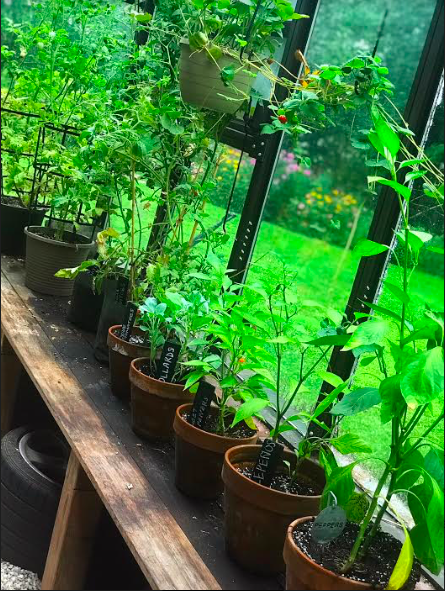 Now I realize that I kind of cheated in this last section, as this didn’t really talk about anything cultural (pop, artistic or otherwise) but it is authentic. I could tell you about how I recently kept smelling the wrist of my friend who, recently back from a trip to Italy, had custom created her own scent and it is absolutely divine; I could tell you about the new hair product that my husband uses that makes him, his hair and his pillow smell so good that I am tempted to put it in my own hair (it is like extra strength gel to slick down hair that is thick and coarse like a terrier’s and Kenny’s); I could tell you about something trendy (whatever the woman used on me at DryBar smelled incredible!) or unexpected (I loved the body lotion so much from European Wax Center that I bought a huge jar of it!) but what do I really want to focus on smelling right now? The roses.

And there you have it. A list of five things that my senses are into right now, with a touch of brevity, a lot of intensity and some real, genuine soul.