Yesterday, I received the most incredible 30th birthday present that I could ever imagine.

Brett Dennen sent me a guitar.

Did you catch that?

Brett Dennen, about whom I have written a significant number of posts, right here on this very site

sent me a guitar.

As in, there was a packing slip from Fed Ex where he had written his return address and my own.

And that Fed Ex slip was attached to a black guitar case, with a sticker on it that says, “Peace Through Music”.

And in that case, there was a guitar, given to me by Brett Dennen.

“How did this happen?” you ask?

Let me backtrack a bit.

Back in the Winter of 2014, during the height of my hard story

my husband reached out to Ben, Brett Dennen’s incredible manager, with my story.

And so this happened:

Rarely am I speechless–lost for words. Thank you, @brettdennen &team for helping me find my way again. My 4eva fave. pic.twitter.com/qcBi85YLv7

The signed cover is framed, hanging prominently on my most meaningful gallery wall.

Since this time last winter we have seen Brett in concert twice, and both times he brought the house down.

I will admit, one of the most exciting moments of my entire life (until yesterday) happened when, while leaning on the stage during his acoustic solo show, I got called out by the man himself for having “a beautiful voice”. I could have stopped there, but I told him that I am the lead singer of a band called Fox and the Hounds, and that I cover his song “Make You Fall in Love With Me” and he and I had a conversation, which was followed by his story to the entire audience about his childhood friend who was allowed to pick out the name for his little brother and named the baby Tod after a character from that movie.

fast forward almost a year. Brett was auctioning off an amazing, elaborate, hand drawn guitar (he is a fine artist as well as being a performing artist) in order to raise money for a charity called The Impact Plan, an organization that supports pediatric oncology in East Africa.

He would be summiting Mount Kilimanjaro to raise money and awareness, representing all of the people who were not and will not be able to make that same climb (up the largest freestanding mountain in the world).

and because we were in the car when the auction ended, we were outbid by $24.00.

I was, of course, disappointed (glad that he was able to raise so much money for such a noble cause, but disappointed, nonetheless).

My husband decided to make a bold move by once again contacting Ben, telling him our most recent Brett story and asking if Brett would be willing to make another guitar, for us, if we would match the price of the winning bid as an additional donation to The Impact Plan in Brett’s honor.

I have been on pins and needles since December, as I followed Brett’s journey up and down Kilimanjaro and watched his totals grow.

I wasn’t sure if this, this unbelievable thing, would or could actually happen…

until we received an email from Ben last week. Brett had a guitar and had sent it via Fed Ex on March 27, due to arrive April 2.

In sending in the donation, I wrote a note to Mr. Dennen himself, explaining how much he means to me and why. My daughter also wrote a note, saying, “I love you, Brett Dennnen.”

And that is how we got to yesterday, one of the greatest moments in my entire life.

Behold, if you will, the stunning guitar that is now my most treasured physical possession. It also holds an incredibly special place in my heart.

The guitar I received has been Brett’s for five years, and he told me the chords that it likes best.

So, here it is. My most special gift.

My apologies that the first photo of the guitar in it’s case is a bit blurry; I was shaking with excitement when I opened it and could not keep my hand still. 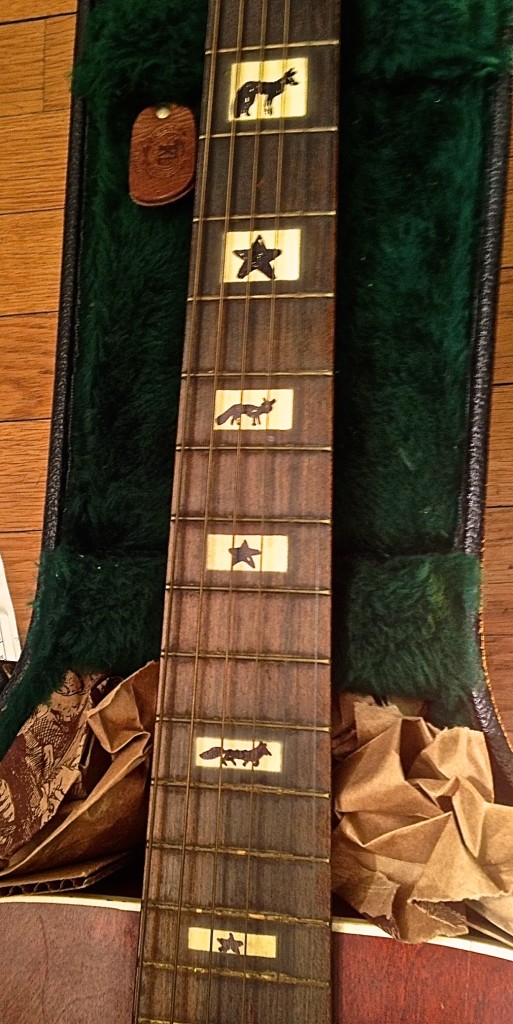 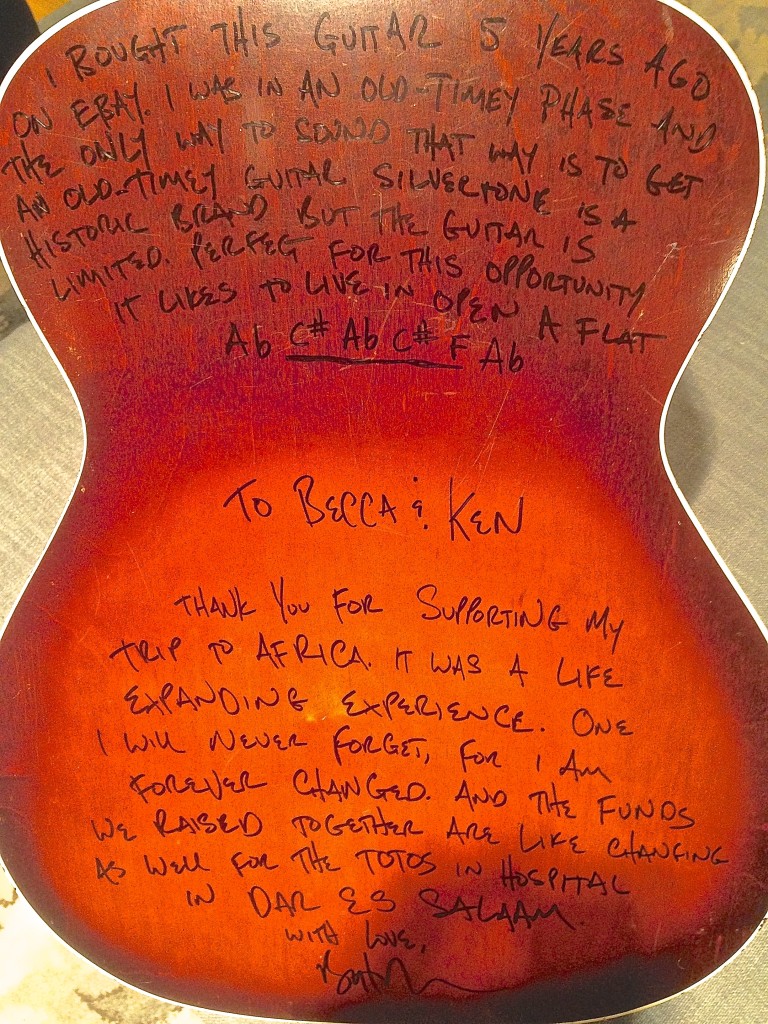 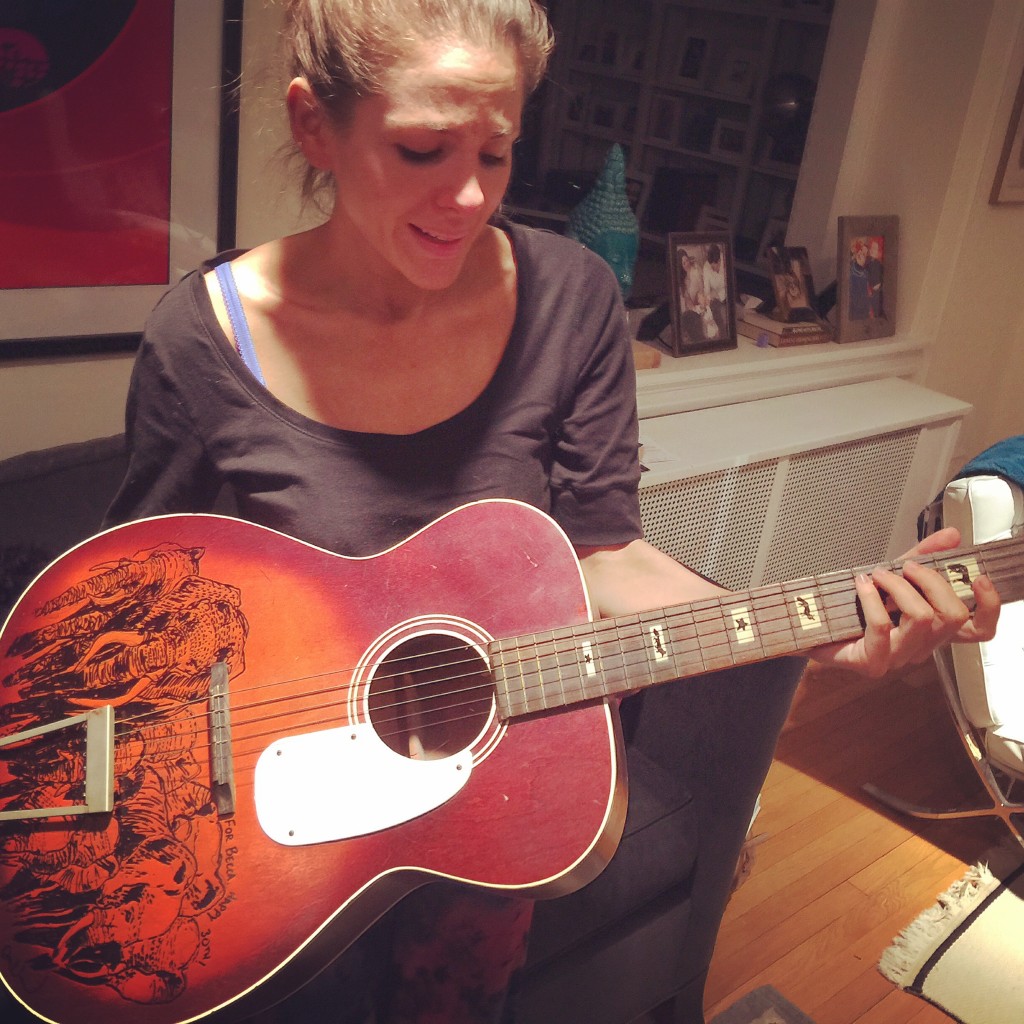 I have a thing with dates; I remember that I first heard “Sydney (I’ll Come Running)” on the radio on November 20, 2011; So I will always remember the joy and magic that April 2, 2015 brought to me.

Brett Dennen has not just facilitated my best dance parties (though he has),

and it’s not because he has gotten me to pick myself up off of the floor (thank you for that one, forreal)

but he has really, truly changed my life.

He has taught me about music, one of my most important passions.

He has taught me about humanitarianism.

He has taught me about generosity.

And he has taught me that he is sincere,

as the lyrics to my favorite song hold true:

“And if you ever need me, you just call me, I’ll come runnin’ to you…”