Yes, you read that correctly. More accurately, I guess, this is a story about mugs.

I’ve recently published some heavy stuff on here, and though I always like to share the parts of life that are hardest (about “what hurts” as my main main Hemingway has advised)–

there are other times when my role is not that of an advocate or an awareness-raiser, but of a storyteller.

Like with “The Lollipop Bank”, a little piece that means so much.

So, here is a story about mugs.

I love them. I love mugs. (I sound like “Brick Tamland” here, I realize; I also love lamp. Forreal, actually.)

For the holidays this year, as I have done many times before, I got some special people in my life a mug as a gesture of warmth and gratitude. I told each of these people, “I know that this may be a strange gift, but it’s kind of my thing,” and I tried not to go into an explanation because brevity is not my strong suit, and so I just handed over a bag and hoped that they would use their mug well.

But because you’re stuck with me here, I will tell you the story of my mugs and why I love them so.

(Preface: As I was laying out the mugs for this post, my daughter walked into the kitchen and said,

“Why would you take a picture of a MUG? No one is going to look at it.

At least take a picture of you drinking from a mug.” Six going on sixteen, much? Anyway…)

It all started in the summer of 2005 when my parents came home from a trip to The Berkshires. They used to go every year, enjoying amazing concerts at Tanglewood and spending time in Vermont so that my dad could teach a course on Environmental Law.

I was moving into my very-first-very-own apartment, and so my parents brought back a pair of hand-painted mugs for me, as a housewarming gift of sorts. I felt so grown up, having something real and artsy. Read: not from Ikea.

(When you are in college, it’s always luxurious to drink out of something other than a red Solo cup, do you feel me?)

I have treasured these mugs ever since. 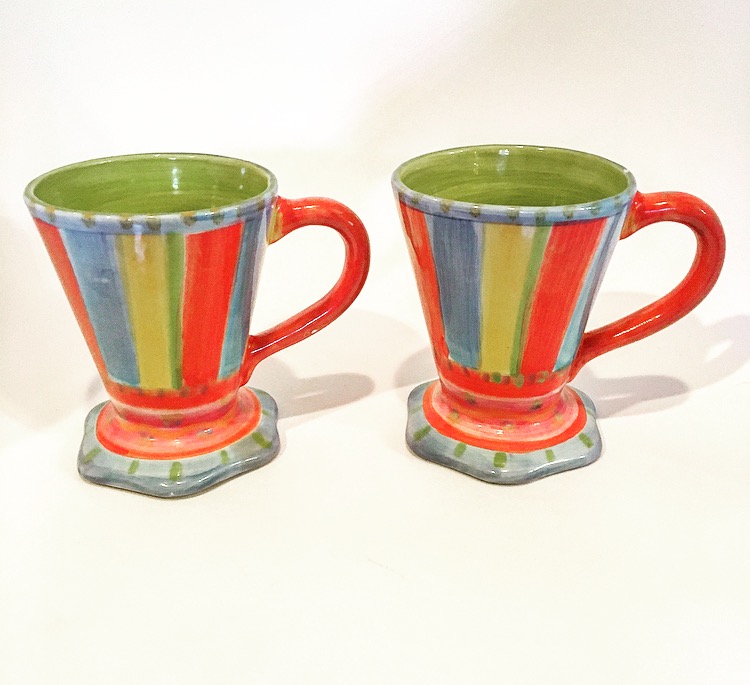 As time went on, my love for mugs only grew.

In April of 2009, around my birthday, my husband had planned a surprise date for us.

This is literally how the dialogue went, and I am not exaggerating:

Husband: I have a surprise planned for us to do today!

Me: Really? Oh. We are going to a “paint your own pottery” place, aren’t we?

Husband: YES! How did you know that!?

Honestly, as soon as he said that we were doing something I just knew. It was weird, but it is 100% true. 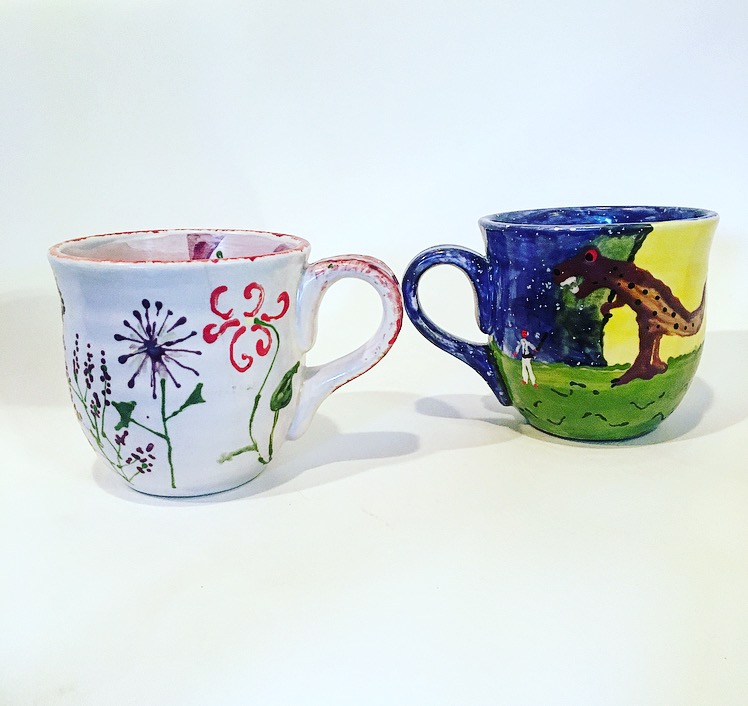 And that day we went to the pottery place and made mugs. My husband has far more fine artistic talent than I do, so his mug featuring a dinosaur, ninja and apple tree is slightly more impressive than my swirling flowers counterpart (it says “All You Need is Love” down the handle, at least), but these mugs have always been special. And I like them because they are big.

As time went on, mugs became more and more special to me. I treasured each one, as they each had something special and unique. Sometimes it was the shape. Sometimes the size. Sometimes the lip or the handle or the picture.

Often times it was about who gave me the mug and why. And my mugs became a part of my routine. I would only drink certain things from certain mugs. 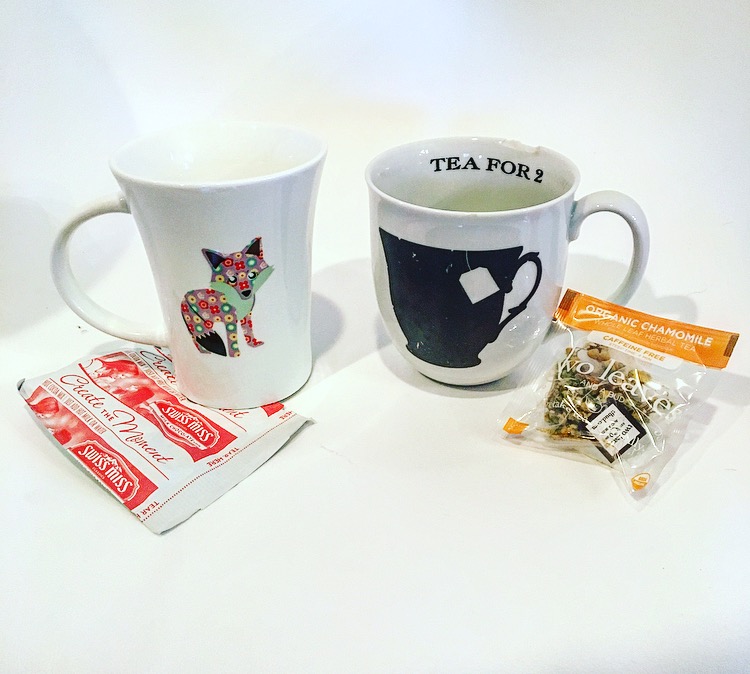 My Fox mug was for my hot cocoa, which during the winter of 2014 I drank every single night. Same mug. Every night. While watching “The Killing”. It was heaven.

My “Tea For Two” mug was special to me as I bought it for myself from a local Pottery Barn store when it was closing it’s doors. It was winter–2012–and it was a snowy day in a cool part of my city. I had taken a break between building snowmen and shopping for antiques and found this sweet little mug. And so it became my tea mug. Always.

There’s my husband’s collection of mugs… 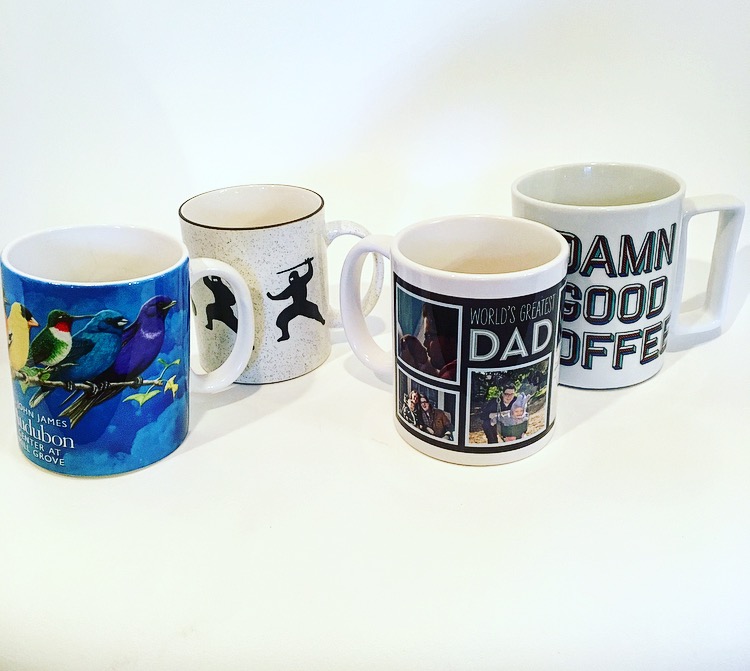 They all represent something different for him: the work he did for the Audubon Society; a gift from besties; his first “World’s Greatest Dad” token (which he has continued to collect every year since); a gift from me, because it is funky and I like the unique shape. And I do make some damn good coffee (as of September, 2016, but whatever.)

And then there are the funny story mugs. I have several of them, but this is my favorite. 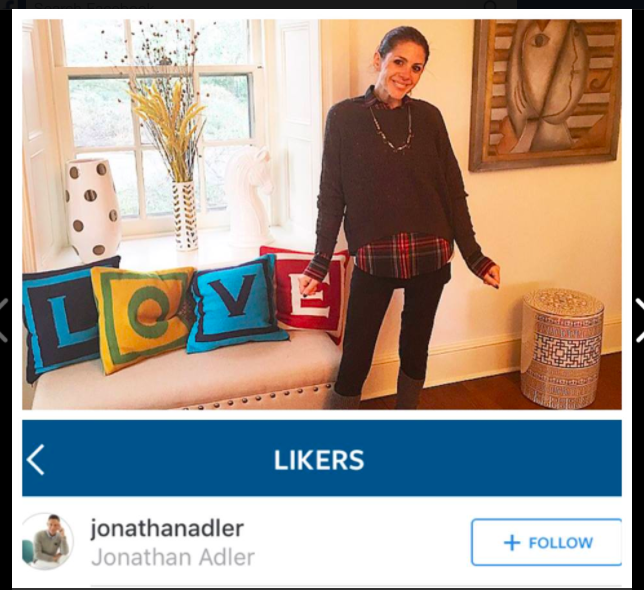 (Side note: 2016 has pretty much been the worst year ever, but I have recently gotten some pretty serious recognition from Brett Dennen, SJP and now Jonathan Adler, so there’s that.)

I ordered this DUO of mugs as a Hanukkah gift for my brousin and his then girlfriend (now fiance!) and when one mug came, I was confused and then so upset. The way that the mug was shown on the website, it looked as though it was a pair. No. It was one mug with two sides. Like this. This is confusing, isn’t it?

So I kept it for myself. Because I couldn’t give two people one mug. And I love mugs.

And then there are the sentimental mugs. The gifts from loved ones. 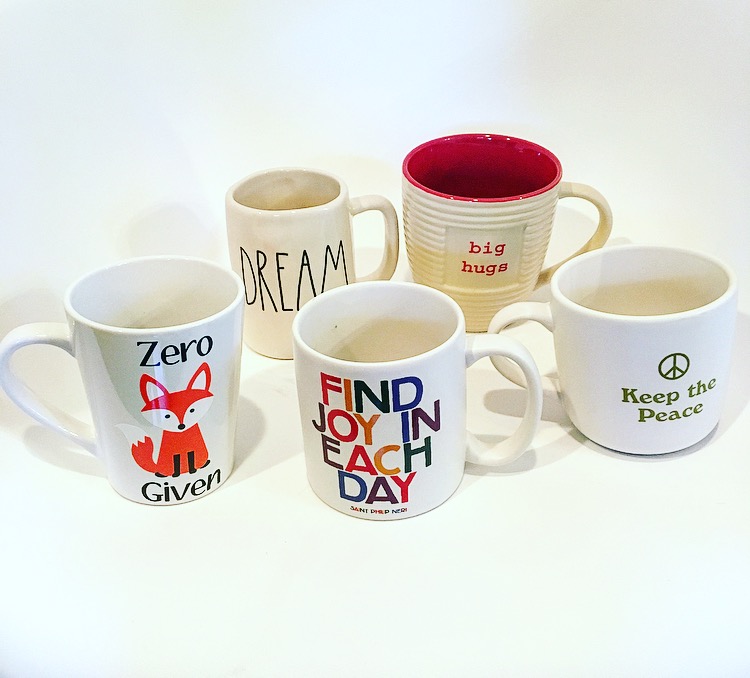 These mugs mean the world to me. They are from different people (though I do have some repeat mug offenders. Mug shot for you!) They were each given to me at a time when I least expected it;

dropped at my house when a friend popped in with her husband, unannounced, on their way home from a date night; handed to me in a moment when I needed the message most; waiting for me on my kitchen table next to bags of gummies and the kindest card. It goes on and on.

So this year when I gave mugs to a few very special people as tiny tokens for the holidays, it was my way of saying, “Thank you. You mean so much to me. This represents warmth. This represents nourishment. I value you.”

Because, as you now know, each of my mugs tells a story. And when I go to pull one out from my shelf (I have three whole shelves dedicated to mugs, in fact) I get to wade through a sea of happy memories; I feel blanketed in love.

Perhaps my daughter was right in that no one will want to see photos of mugs and that this would have been much more interesting if the mug was filled with a “Fox on the Rocks” or if the mug was the cause of another kale-amity.

But I think that it is also important to share the little things. The tiny quirks that make me who I am.

Like the fact that I appreciate hand-painted pottery or have idiosyncrasies about how I drink certain hot beverages or that my husband and I have this weird ESP thing going.

My love of mugs isn’t one of the defining facts that I would put in the 140 characters allowed when writing a social media bio. It was not in my book proposal. I don’t wear it on my sleeve.

But if someday I give you a mug, and you think, “Why couldn’t she have just given me a gift card to Starbucks?”,

now you know that it is because you mean something to me. That I am expressing warmth and sending it your way.

And now I am off to have a cup of hot cocoa. Out of my fox mug. Of course.

I wouldn’t have it any other way.