If you follow me on any form of social media,

or if you’ve talked to my parents or Pop Pop in the past few days,

you will know that I had quite the exciting experience last week, when I was featured in one of the biggest, greatest, most iconic newspapers in the world.

Famously the “newspaper of record.”

What an incredible honor.

I had the chance to speak with acclaimed journalist Ron Lieber

and my story was included in his article entitled, An Insurance Penalty From Postpartum Depression. 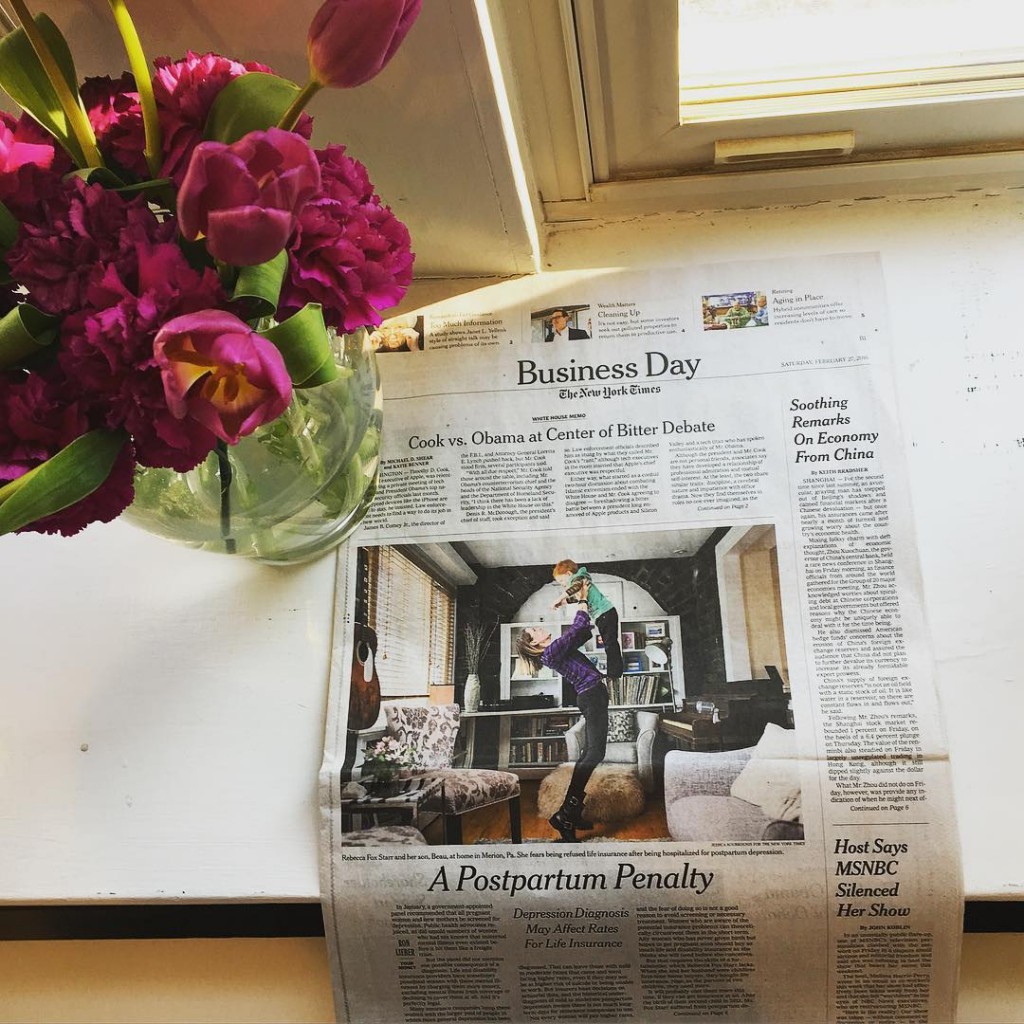 When the story came out online last Friday, I was thrilled. Mr. Lieber (he told me to call him Ron, but still) raised such an important issue and his article actually helped me with it’s salient advice.

But, it wasn’t until Saturday morning, when I got an early call from Mommom, that it really hit me.

“Your picture is taking up the entire front page of the business section,” she said with glee.

And I was incredibly humbled and, admittedly, wowed by the cool factor of it all, but, most of all, I was so happy that I was able to help to contribute to such an important piece.

And that is why I write.

People comment quite often on the fact that I am so “brave” for putting my story out there.

Some things happened to me.

I didn’t ask for them to happen, but they did.

I am not unique in that way.

But, just over 2 years ago, I decided to come forward with my story of perinatal depression, as I hoped it would reach even one person who was suffering like I was. I wanted other people to feel less alone.

It isn’t always easy writing about the things that make me feel vulnerable and weak.

I am very careful about the exposure of my kids on the internet, because I never want my decision to write openly to have a negative impact on them in any way.

(By the way, the way I justify this as follows:

I used to only post photos of my children from behind or with their faces obscured, but that has changed, and now their pictures are out there on the internet. I don’t include them in most articles, and try my best to post cute things like their feet or accessories, but sometimes their faces are visible and I know that.

I have never shared their names on this site and never will. Even in The New York Times article I had the writers refer to my son by the name we call him, but it is not his full legal name.

I am confident and optimistic that I will raise children who will be proud that their story, our story, was able to help thousands of people across this world. I hope that I do.

When the article in The New York Times came out, I sent it to my son’s email account–the one I set up for him when he was born so that I could write to him every now and then–with a message attached, explaining my decision to include him in a piece that talks about postpartum depression.)

My blog has become a defining part of my life. Those who know me have learned more about me because of what I write. Those who don’t know me sometimes recognize me on the street or at the coffee shop and I am always met with kindness. It is so incredibly touching.

I have learned about myself.

I have found my voice and the confidence to use it.

And just like every piece I craft, I hope that this post helps at least one person here in this world.

And that, my friends, is why I write.