The magic formula,
for contractions.
Once you’ve reached this labor milestone,
The OB’s emergency on-call line is now at your fingertips.

And I was there.
I was so there.

I had been having Braxton-Hicks contractions for weeks and weeks.
My entire tummy would tighten up into a crazy, lopsided knot.
I was actually happy to be having these practice contractions, because I felt like my uterus would be in good, fighting shape for D-Day,
And, at some point, I was sure they would start to help my dilation/effacement process.
Isn’t it amazing the crazy things we can convince ourselves of?
I’ll blame it on the hormones.

And so, by 8am on that Thursday morning, I had been having regular, painful contractions,
Every 5 minutes,
Lasting more than 1 minute each,
For about 10 hours.

I called the OB.
I told him I was in pain.
He told me he was happy to hear that.
“Come on in!” He told me.
“This better not be a false alarm. I refuse to be one of those false alarm people!” I told my husband.
“You’re so in labor,” husband told me.
“I can’t wait to meet you!” I told baby.

I put some blush on my cheeks, wrangled the pups, grabbed our hospital bag (read: pointed to the bag and told my husband to carry it. It was heavy!) and headed to my parents’ house to drop off the dogs and pick up my mom.
My husband and I had made the mutual decision to have my mom with us in the delivery room. We both wanted to be able to hold her hand, if need be, and I knew she would be able to be strong, even if it got scary. She had been through it, twice, and could be the motivation I needed to stick with my “au natural” labor plan.
Plus, my husband sometimes gets a little queasy. If he went down, I needed a back-up.

And off we went.
I felt pretty good, walking into the hospital and scurrying (read: waddling; stopping every few minutes during contractions) up to Labor and Delivery.
This was actually my second trip to L&D, the first being at 34 weeks when I had to be monitored for extreme dizziness. I was having pretty regular contractions at that point, but they weren’t doing anything to put me into labor, so the doctors decided to keep me on bed-rest for the duration of my pregnancy.
By the time we arrived in Labor and Delivery for the real deal, it was all old hat for me. I knew where to check in, had met some of the nurses and could almost figure out the crazy, impossible buttons of the hospital gown.

When the resident came in to examine me, before my OB arrived, we were all surprised to learn that I hadn’t progressed at all from my check-up earlier in the week. However, my contractions were strong, long, and regular, so the doctor told me that this was just early labor, and that I’d be in full-blown labor in no time.
She told me she had a good feeling.
So, we waited.
And waited.
And 3 hours later, my contractions only intensified. 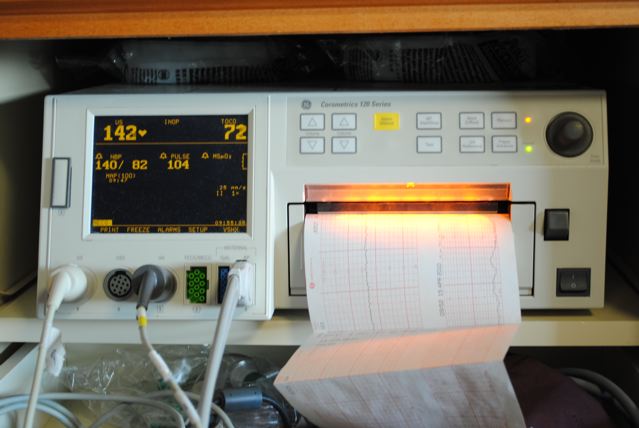 My OB came in to visit me.
I was in pain, and felt tears stinging my eyes.
The OB took one look and me and said, “You’re not in real labor. I can tell by looking at your face.”
I was in shock.
Shock, and rage.
What do you mean not real labor? Aren’t you seeing my contractions on the monitor? Don’t you see these tears?
But, as the nurse told me, in real labor, I wouldn’t be able to walk and talk. When that time came, I’d just know.
And, just as he predicted, my exam revealed that I had not progressed at all in those 3 hours.
I was 1 centimeter dilated and 50 % effaced.
But, the OB told me not to worry.
He would see me in 24-48 hours for the real deal.
They sent me home.
Let me tell you, when you’re 40 weeks pregnant, have been on bed rest for 6 weeks, are swollen, miserable and desperately impatient, having to waddle out of the hospital without a baby in your arms is not a fun thing.
Plus, I was a little embarrassed.
Yes, all signs had pointed to labor,
And yes, the doctor himself had told me to come in,
And yes, the doctors who examined me in Labor and Delivery were sure that I was in labor,
But still…
I went home to my parents’ house, with my tail between my legs, and decided that I would walk this baby out.
Now, up until this point, I had been on bed-rest for a month and a half. Plus, I had a full-term baby in my belly, and a uterus that was contracting at regular, close-together intervals. I could barely put one foot in front of the other.
But, that April afternoon, my husband took me on five,
Yes, five,
Walks around the neighborhood.
As I walked, I used my hypnosis to picture my cervix opening.
I was sure I’d be back in the delivery room by the end of the night.
So much for these feelings of mine.

The next morning came and went.
I bounced on my big, silver gym ball.
I pressed all of the acupressure points I knew how to find, and then some.
I ate approximately 9 pineapples.
I did every trick in the book.
I could still walk and could still talk, and I told myself that I would not be going back into Labor and Delivery until it was really, truly, beyond a shadow of a doubt,
Time to give birth.
I would hold out as long as possible,
So that by the time I arrived,
All I’d have to do was push.

But, at the time, I was in agony.
Not only had I not slept in two nights,
But I was having strong contractions every few minutes,
And I was in a horrible state of unknown.
To give me a positive distraction,
My mom took me out to lunch at Neiman Marcus with my Mommom and Aunt.
It was our favorite spot for girls lunches,
And would be the perfect way for me to take my mind off of my “latent labor”.
After we finished eating,
We ended up in the shoe department.
We met a woman there who told us a labor trick of her own.
The day before she gave birth, her mother bought her a pair of shoes.
That’s all we had to hear.
Before I could change positions, my Mommom had picked out a beautiful pair of sandals for me and the saleslady was ringing them up.

There I was, shoes in hand, baby in belly,
And still able to walk.
This wasn’t looking hopeful.

And then, on our drive home from the mall, things started to look up.
My mom gasped, as she pointed to her wrist.
“My bracelet!” she exclaimed.

You see, my mom had been wearing a red string on her wrist since her trip to Cambodia a year and a half earlier. Knowing that being a mother was my greatest dream,
She had made a wish when putting on her sacred, traditional bracelet. According to legend, when the string broke, the wish would come true.
She wished that I would have a baby.
She hadn’t taken the string off, since.
So, that afternoon, when we looked down at her wrist, we saw that the string had unraveled and broken off her of wrist.
“It’s a sign!” My mom was so excited.
We knew it meant something.
It had to.
And so, when I got home from the mall and decided to lie down in bed,
I had a little bit of my hope restored.
And it was that hope that I was clinging to,
As I felt warm water start to spill out from under me…

Stay tuned…You think you know, but you have no idea….