The other day, in this post, I promised that I would blog more. Some of the blog posts will be long and serious, Some will be short, little vignettes. And some will be totally random. Welcome to totally random.

This post is being brought to you by the fact that over the past few days I have said the words, “actually, something that you don’t know about me is…” and these things were said to people with whom I am really close. Like, really close.

Like, Kenny. 99% of the time that I tell Kenny something I think will be a new story from my past, he beats me to the punchline. But, this week, somehow, I told him something new (which is a hard thing to do in your thirteenth year together).

Please do not think that I am being vain or under the misapprehension that you have a burning curiosity to know obscure things about me or my past. I don’t know about you, but sometimes I like to read a totally random, mostly lighthearted post, amidst the sea of not lighthearted stuff in which we are all currently swimming.

Sometimes, I like to read something and to laugh. I want to make you laugh. At me. It’s OK. Bring it.

I even checked my blog archives to be sure this was not a repeat blog post, and, what I found is that I have done a lot of lists in the past – a lot of things like this – but I believe this is the first of its kind.

And so, I now present to you,

11 things you don’t know about me:

1. When I was younger I did some professional commercial acting. The biggest “job” was for the ABC network, during breast cancer awareness month, and it involved me holding up what was supposed to represent my first bra, as I said, proudly, “Look what my mom got me!” I landed some of these commercials after an audition at a production agency and, you guys, this is so weird to write about, because it is so weird. I remember being on a stool, in a room with just a camera and one of those two way mirrors, for a screen test. I had to hold a JIBBA JABBA toy and react to it as it moved around in my hands. Apparently my reactions were suitable and so I booked a few jobs.

2. When I was younger I did some professional infomercial acting. But, by younger, I mean 23. This is, perhaps, even weirder than the Jibba Jabba thing. Long story short, I was approached to act in an infomercial for a product that would repair damage to walls. It all seemed very legit, as I met with the director/producer/inventor for an interview over coffee and to go over the plans and my contract. And, one morning, I drove 40 minutes to a new-construction development in Phoenixvile, PA*, and shot this thing in a vacant (but very nice!) townhouse. The whole thing was strange: the premise, the product, the fact that one of the actors wasn’t actually an actor but rather a neighbor or something. But, the weirdest part of the whole thing? I did my shoot all in one day, got paid, and then NEVER SAW THE INFOMERCIAL. To this day, despite my extensive internet searching, I have not been able to find any evidence that this product, or my video, ever happened. If a woman acts in a townhouse in Phoenixville, but no one is around to see it and it is not anywhere on any of the internets, does it make a sound?

4. One of my very favorite foods is sushi. I have loved it since I was a very little kid. However, my first experience with sushi, in retrospect, is rather horrifying. It was with my Nanny and Poppy, from a little stand ON THE BOARDWALK in Ocean City, NJ. And it was ikura. Ikura is salmon roe; the big balls of caviar that look like baby Nemo at the very beginning of the movie. I am lucky to still be alive, today.

5. I am a really, really big sports fan. Not all sports. Though I love a nice Phillies game it is primarily for the sunshine and ability to drink beer and eat giant soft pretzels outside. But, football? OMG. I am an Eagles maniac. I watch College Football with a level of passion and intensity that is usually reserved for Broadway shows. I am currently obsessed with my March Madness bracket. I do not know exactly why this surprises people so much, but I have found myself in a dozen situations recently in which someone brings up football, I make a comment that shows a certain level of insight, and they stop to tell me that they “would never have guessed” that I am so into it. I’ll try not to read into it too much and just say, let’s go UMich (and if you want to talk to me about the reasoning behind my choice, let’s call it my 1993 redemption song). 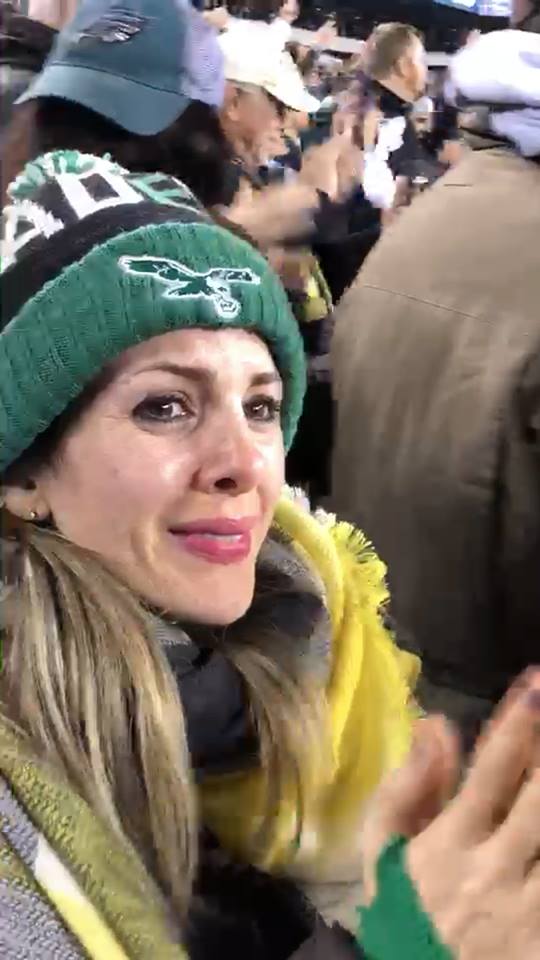 6. I have beaten Donkey Kong Country twice: Once in 4th grade and once as an adult (around 2011, when Belle was a baby). I wrote this post back in December of 2010 and I had not re-read it until just this moment, but it is still a pretty amazing story. I actually said, “Awwwwwwwww,” out loud. But, not quite as amazing as the fact that I beat Donkey Kong Country, which I consider to be an incredibly elaborate, pretty difficult game, TWICE.

7. I once flew in the cockpit of a plane – during landing – from Barcelona to Venice. I am a fearful flyer, and so every time I get onto an airplane I ask the flight attendant if the flight will be safe or smooth or something of that nature. During my time in Barcelona, 13 years ago, the kind flight attendant brought me into the cockpit to meet the pilots, so that they could offer me further reassurance. (Note: now I often ask if I can go into the cockpit to meet the pilots; they think it’s for my kids and sometimes hand me wings; it is 100% for me.)

With 30 minutes left of the flight, I heard my name announced over the loud speaker, and the flight attendant beckoned me, signaling me to follow her. She opened the cockpit door and the pilots pulled down the jump seat. “Do you want to sit with us while we land this plane?” they asked. I remember being amazed by how complicated and how simple it was, all at the same time; I remember that when we did land, bunnies ran across the tarmac. My next memory involves a gondola and homemade pasta, but that is not nearly as vivid as my time in the Iberia Airlines cockpit.

Aaaaaaand…I have also crashed landed in a hot air balloon. But, that’s another story for another list.

8. I learned to read at a very early age (thank you for the chalkboard on the driveway, mama!) and have been devouring books for as long as I can remember. I think that it was my love of reading that prompted my love of writing. I always took any opportunity I could to write, and if given an assignment, I would run with it. I could point to countless examples, but I think that it is appropriate to say that I am nothing if not consistent in that I have never been able to make a long story short. In sixth grade, Mrs. Nelson gave us a writing project. Honestly, I forget the prompt, but the short writing assignment, for me, turned into a 64 page murder mystery story, using the Rashomon effect. I have always been completely compelled by the idea of the same event being told in different interpretations (perhaps this is why my honors thesis was a “Cubist Family Portrait Through Writing”) and in college I explored this concept many times. I’ve written about writing (meta?) and referenced both my short story called “Slice” (that my best friend has since found on her computer, as I had sent it to her first semester Freshman year, 11 years prior) and “Merry Fucking Christmas,” the final project in the short story class second semester of Freshman year that made me declare English as my major. When I was in Barcelona I wrote another Rashomon-style story called “Lost in Four Walls” and I have no idea where it is now and I can’t completely conjure the subject but I remember a sad woman and beautiful copper pots that hung above an island in her kitchen.

True to form, a little list item that was supposed to be short and succinct turned into something long, rambling and without a clear point. Welcome to “Becca’s version of a story!”

9. Nicknames. I love when people call me by a nickname. In fact, I love it so much that it will actually make me like someone more, just for that reason, alone (if I like you at a 7 and you greet me with a, “Hi, Becs!” then you are now a solid 8.5 to me). Different people in my life have different go-to nicknames for me: We know that Poppop calls me “Pretty” and my mom calls me Beccadoodle(s) and Beccalove. Kenny calls me Bec, mostly, but also goes with Beccles and Shmeck (a/les). Other nicknames that have been (or are currently) used by friends and loved ones include: Rebec, Rebex, Bex, B, Foxy, Foxy-Mama, Bexter, Becks, Fox, RFS, Splasher, Beccalicious, RJ, and BFox.

If you want to score points with me, give me a nickname. Trust.

10. My list of stupid human tricks includes: Crazy Strength (used for arm-wrestling and lifting large people), headstands, the ability to hold my breath for a very long time, mad tongue-twister skills, decent hula-hooping (but I won’t bet money on this one), a weird memory for dates and what I was doing on a specific day in my history (*on my drive to the weird townhouse for the weird infomercial shoot I was wearing a black tank top, colorful skirt and I ate a chocolate and mint Luna Bar in a red wrapper), and doing a near-perfect impersonation of the sound made by those spooky mats that you step on at Halloween when you approach a door for candy.

11. After today, you can gall my MacGIRLver.

I hope that some of the list items above have made you smile, laugh, or make fun of me in your head.

I hope that you now know me better.

I hope that someone out there can find that damn infomercial for WallRX.

I hope that you challenge me to an arm wrestling match and bet a lot of money on me losing.

I hope that you you never chase me…literally, at least.

I hope that you now have a better understanding of who I am, only because I think that it will give you a better understanding of who YOU are; because I thought of 11 things (my lucky number! Bonus fact for you!) about myself that were different or unique or obscure, I hope that it inspires you to do the same about yourself. Because we often put ourselves into boxes with labels that can, at times, feel very small. I am a mother. I am a job title. I am a category to be chosen on a form at the doctor’s office. But, really, we are so many things. And some of them are weird!

…which is totally awesome.