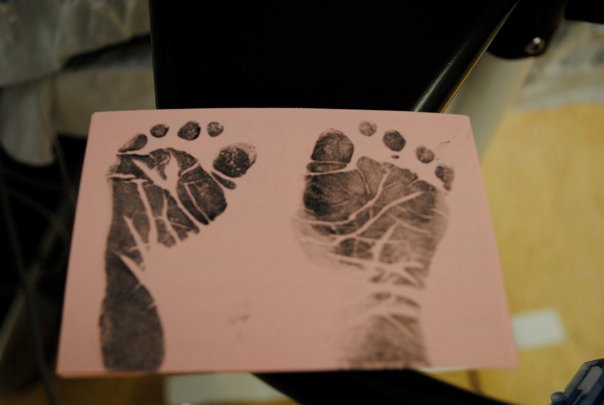 My water was broken,
My contractions were steady,
My IV was in,
It was,
Actually,
Really,
Truly,
No doubt about it,
Happening.

Yet, still, there were a few things that weren’t adding up.
First, the nurse was giving me another round of sugar water, this time through my IV, just so they could see the baby “wake up” a bit.
It’s not that she wasn’t moving,
Or that her heart wasn’t beating at an ideal rate,
It’s just that she wasn’t having the accelerations that they like to observe.
She was fine,
They just wanted to keep a close eye on her.
I know this probably goes without saying,
But this freaked me out, completely.
I kept my eyes glued to the heart monitor, willing the numbers to rise and fall,
My own heart racing as I stared,
And prayed.

Also, there was the whole business of my cervix.
You see, my dear, sweet cervix decided to hold strong at
1 centimeter dilated and 50% effaced,
Which seemed comically impossible to me,
Considering the strength of my contractions,
And, oh, you know,
The fact that my water had now officially broken.

Side Note: Let me go on the record to say that I am 100% positive, without a shadow of a doubt, that my water had, in fact, broken the day before, since it was the exact same thing in every way, and I don’t care that the “head shaker” went to medical school and I did not, I know what happened, and that was a broken water if I’ve ever felt one (which I obviously have…twice.)

Finally, a two key people arrived:
The on-call OB and my mom.
Now this show could really get on the road!
Come on cervix, this is your cue to open.
Or so I thought.
I don’t know whom I was happier to see, at that moment.
Actually, that’s a lie.
I do.
It was my mom.
Obviously.

The nice Doctor introduced herself to me,
(Oh, did I mention that my wonderful OB, a doctor who happens to be a solo practitioner, boasting a stellar record of delivering 90-some% of his own patients, you know, the only doctor I saw throughout my entire pregnancy—yes, the same doctor whom I saw the previous days in Labor and Delivery—the one who told me that he would see me, to delivery my baby, over the weekend—was not on call that evening? Yeah, that happened.)
and told me that the baby kept moving away from the external fetal heart monitor,
so they would have to attach one internally, on the baby’s head.

Remember my warning about this piece containing some graphic material? Well, this is it. Brace yourselves, folks.

The doctor reached to try to place the electrode on the baby’s head,
And stopped, puzzled,
Explaining that the baby was still so far up,
She could not even reach the top of the head.
At that point, the flood gates opened.
And no, I am not talking about tears.
Yes, those were there, too,
But, I actually mean my water breaking,
Yet again.
Except, this time,
It was exactly as they show it in the movies.
It’s raining, it’s pouring,
I think you get the picture.
What I didn’t see, at that time, was that there was meconium in the water.
This meant that the baby had,
well,
pooped,
in the womb,
A sign of some fetal distress.
The doctor did not mention her discovery at that time.
Smart woman.
She did, however, tell me that we needed the baby to come, and that it did not look like my labor was progressing on its own.
I didn’t need her to tell me that.
I was the one stuck at 1 centimeter dilated and 50% effaced for,
Oh,
3 days.
She mentioned the option of labor induction,
Which meant they would give me medicine to cause strong contractions.
If all went according to plan, I would begin to dilate and efface overnight, and would hopefully be in active labor by the next day.

Now, this is the part of the story where all of those feelings kicked in. This is when something came over me,
I don’t know what,
And I don’t know how,
But I knew what I had to do,
And that had nothing to do with a Pitocin drip.

“I need a C-Section, and I need it now.”
The doctor and the nurse exchanged a glance.
The doctor looked back and forth,
Between the nurse, my mother, my husband, and myself,
And she nodded.
“I think you’re right.”
The nurse took my hand,
As she told me, “I’ve never seen a first time mom make such a smart decision in all of my years here.”

The next thing I knew,
And I mean this, sincerely,
My husband was dressed head-to-toe in sterile gear,
And my dad was in the room, giving me a hug.
Now, I still don’t know how he managed to get there so quickly,
Maybe it’s some kind of dad radar,
And I don’t know how he was allowed back into the delivery room,
But maybe it’s some kind of dad charm,
But I do know that my usually swarthy father was a sickening shade of white.
He looked at me, a phony smile plastered on his pallid face, and it was at that point that I said,
“OK, I guess I’m going to die.”
Now, you may say that I was being overdramatic,
But after 3 days of labor, 3 sleepless nights, my aunt’s horrific accident, a day of a quiet baby, the funky heart monitor strip, the meconium, my drug allergies and my paralyzing anxiety,
I was convinced
that I was toast.

The next thing I remember was being wheeled into the operating room.
The hospital hallway was shrouded in an eerie light, as the OB, resident, med student, anesthesiologist and nurse wheeled me down the hall and through the big, ominous double doors. I remember seeing nurses, stationed in the hallway, as I was being wheeled by, and I asked them if I was going to die.
They told me that I was not.
I didn’t believe them.

As they transferred me onto the operating table, I began to shake.
My husband wasn’t with me, as he was not allowed to be in the room as I got the spinal,
So the sweet nurse held my hand in his place.
I later learned
That for my husband,
those 15 minutes were the worst of his life,
As he paced the halls like a mad man,
Terrified for his wife
And unborn baby,
Behind those heavy doors.

I can’t say that I can remember the moment that my husband was allowed back with me,
But I do remember telling him that I couldn’t feel anything below my shoulders,
And that I was terribly scared.
And I was shaking.
And I was nauseas.
And, did I mention, scared.
Scared, out of my mind.
Also, I couldn’t breathe.
Not only was my chest completely numb, making the sensation of a deep breath nearly impossible, but the medicine they used in the spinal made my nose stuff up so much that I couldn’t inhale at all,
And my mouth became so dry that I could scarcely speak.
The kind, gentle anesthesiologist provided me with manna in the form of a wet sponge, as he soaked my trembling lips, helping to ease the terrible dryness.
I don’t think I’ve ever been more uncomfortable in my entire life.

And then, before I knew it, the anesthesiologist was instructing my husband to take out the camera and to hold it over the curtain that separated my head from my abdomen.

The anesthesiologist told me that my baby would be here in a matter of minutes.
I was so terrified that I couldn’t even speak,
And I could barely stop shaking enough to nod my head.
As I’ve said before,
It was then that my husband squeezed my quivering hand,
And told me to listen to the radio.

It was “Desperado” by The Eagles,
My Nanny’s favorite song.
I had written about my Nanny,
And her love of this song,
For my Thesis,
So it was particularly meaningful to me.
It was a sign from above.
My Nanny couldn’t hold my hand, literally, but she was telling me that everything was going to be alright.
And it was.
The next thing I heard was my daughter’s voice.
Her cry was fast and staccato,
And the most beautiful music I’d ever heard.
She sounded so strong,
Her voice already so powerful,
And I knew that she was OK.

At that point, the OB told me that her cord had been wrapped around her neck two times.
Thank goodness we got her out when we did.

I wish I could tell you that it was at that moment that I forgot all of my discomfort, and simply stared into my daughter’s gorgeous blue eyes, as I told my husband how much I loved and cherished him.

That did happen, but much later.

A that point, my shaking got so bad that I couldn’t form words,
And my nausea had turned into relentless heaving.

At one point, which felt like it was 5 hours later, I asked the OB, still out of my view, behind the blue curtain, if she could give me something to help my nausea.
“Oh, don’t worry,” she said. “You’ll feel much better once I put your uterus back in.”

Back in?
I hadn’t been aware that it was out.

And the rest, as they say,
Is my happily ever after.

They wheeled me back into the delivery room, and I saw my husband, parents, sister, and Mommom, who came running, in the middle of the night, to be by my side, as only Mommoms can do.

We all hugged, and cried, and they showed me pictures of my daughter, as I hadn’t been able to take in her most beautiful face while I was still in the OR.

What I didn’t know at that time, was that when my husband went out to greet my family after the baby was born, he walked down the hall, crying. When my family saw him, they were sick with worry. They didn’t realize that he was sobbing in joy, until he held them and told them, “She’s so beautiful.”

And she was.
And she is.
From the moment she was born,
She was the most amazingly beautiful, angelic, perfect baby that there ever was.
But, I’m here mom.
I’m supposed to say that.
However, in this case, it’s actually true.

My daughter was born at April 18, at 2:22 in the early morning hours.
She weighed 7lbs 12oz and was 21 inches long.
She has brown hair, big, shining eyes, a heart shaped face and lips like Cupid’s arrow.
She radiates goodness,
And lights up the universe.
She was welcomed into the world by our parents, grandparents, siblings and friends,
And those loved ones who are no longer with us,
But for whom she is named.
Her chorus of angels.
It was her angels who provided the soundtrack to which she made her grand entrance.
They wouldn’t have it any other way. 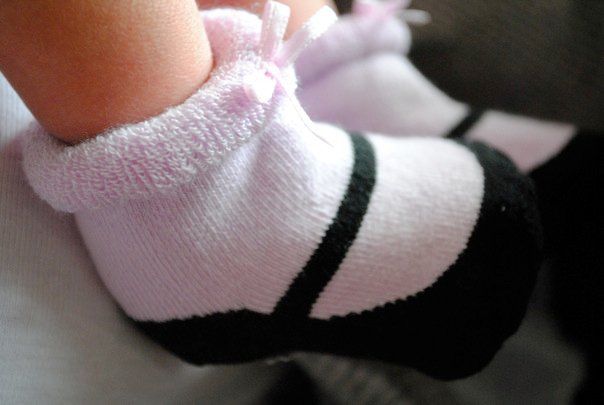 Once upon a time,
I had a plan.
I had a life that I was used to.
I had it all figured out.
And then, one day,
Life changed.
And it became more colorful,
And rich,
And wonderful
Than I ever could have dreamed.
Once upon a time,
I had a baby.
A daughter.
A Princess,
whom I cherish,
And love,
Every minute,
Of every day.
And,
fortunately for me,
this is just the very beginning of her
Magical
Fairy-tale
Story.