This is a post about a music class. Except, it’s really not.

While I will share with you about our incredible experience at Songs for Seeds (the Wayne location!), this post is about so much more; parenting, music, human connection and Abba. Not necessarily in that order.

Fact #1: If you have spent any time on this blog, you will know that I am obsessed with music. I am a singer/songwriter, I have daily dance parties, I have been in bands for the past few years, I have performed my whole life, singing everything from rock and roll to showtunes, we are devoted record collectors and concert goers…need I go on?

I would venture to say that at least 28% of my Instagram Feed is dedicated to music in some way (e.g. this past weekend we spontaneously saw The Beach Boys with a VERY special guest…

…and before that I posted, in the past week alone, about things including–but not limited to–our new obsession with the Just Dance video game, seeing Benj Pasek & Ben Platt of Dear Evan Hansen perform at a beautiful charity gala, dressing my kid in a Sublime “40 oz to Freedom” shirt and watching my daughter grace the stage in her first grade musical. See what I mean?)

Music is an integral part of my life, and I could not live without it. And, I am fortunate enough that my kids feel the same way.

I first met Jill Littman, the owner of Songs for Seeds in Wayne, when she reached out to me with the nicest email message. She had me at hello.

We immediately made plans to connect IRL. We shared an entire brick oven pizza AND our entire lives in a meeting that could have lasted forever. Talking to Jill was like talking to an old friend. She texted me after our lunch date and said that we were kindred spirits and I felt so giddy and touched, as I totally felt the same way.

She invited me to bring my kids to a Saturday morning class at the Songs for Seeds Wayne studio. I was hesitant, at first, and said so very honestly to Jill. I thought about going alone. Yes, my family loves music and yes I was a music teacher for years, but my son can be a bit challenging.

Fact #3: My son can be a handful. While he’s gotten better lately, he is still as stubborn as can be. Strong-willed, let’s say. Remind me to tell you what happened about 40 minutes ago when I did not cut his watermelon into a proper triangle. It did not go well.

With excitement (and some trepidation) I brought my kids on a cold Saturday morning to a music class that spanned a wide range of ages. My daughter was the oldest and that was actually a good thing. But first, let me back up. What is this Songs for Seeds, you ask?

Well, allow me to share with you. As they say, “This weekly, 45 minute, interactive class encourages children, newborn to 6 years old, to sing, dance and play along with a live, three-piece band.  Kids rock out with children’s instruments, as well as real drums, guitars, keyboards and instruments from around the world.”

I am not disparaging any other music classes, but I have been around the music class block. This was not simply a circle time during which time a teacher sits properly, banging together those stick things with the grooves in them and encouraging the kids to bang their sticks along with her.

(What are those stick things called, by the way? Do you know what I am talking about?)

Songs for Seeds is not just a time for shaky eggs and nursery rhymes. Rather, it has elements of what makes children’s music classes special, but it is also so much more.

In their own words, they explain that, “Our teacher/musicians take students on a musical journey each week through a series of seven engaging activities. Your kids will experience music and language from cultures around the globe, help create magnetic art murals during a sing-along of well-known nursery rhymes, be amazed and delighted by magic tricks that are used to practice numbers and counting and get fully engaged in a wheel spinning game that reinforces the names and sounds of animals. By mixing our original kids rock ‘n’ roll with popular tunes, the band is sure to please little ones and their adults.”

YES. Yes to all of that. And I got to experience it firsthand.

Here are my ladies. 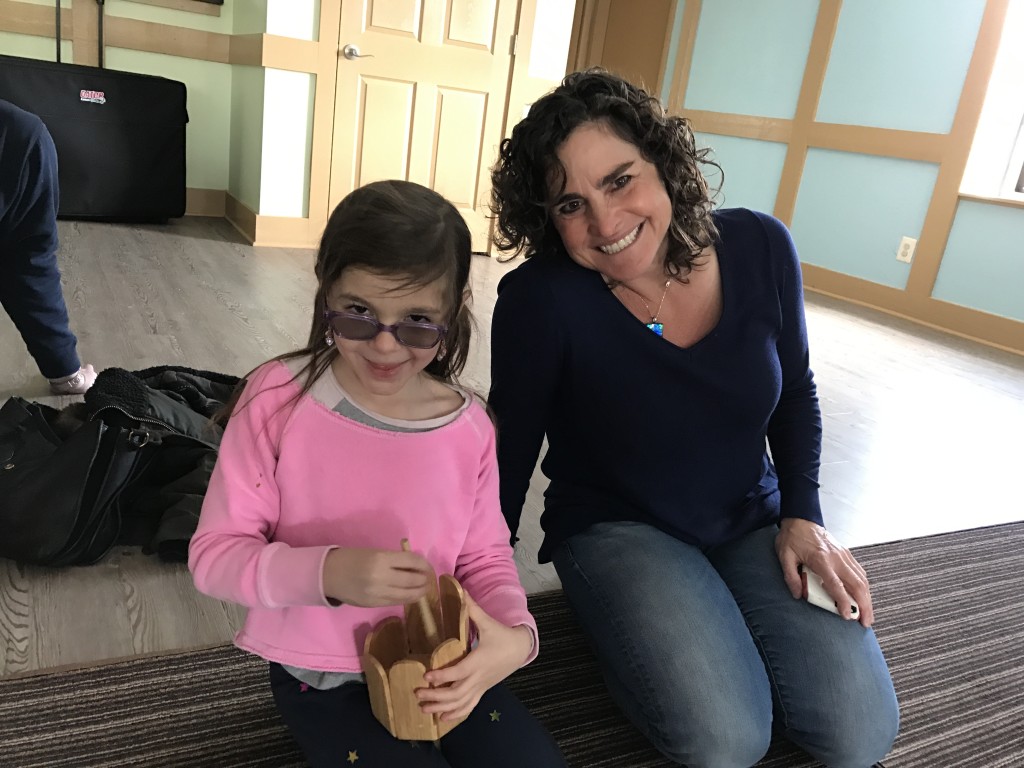 Jill isn’t just the owner, but she is intimately involved in every part of her classes. For her, it is not a business, but a passion. She finds so much joy in making children and their families happy. It is a joy to see.

When the class first began, I was a little wary about my boy. He was being particular about his instrument, and I had already made a “Plan B” that would involve his removal by my husband so that my girl and I could experience the class. But, to my surprise, he warmed up quickly.

Once he was given things to bang together, while a guitar, piano and drums played in the background, he settled in. He found his groove. Literally. 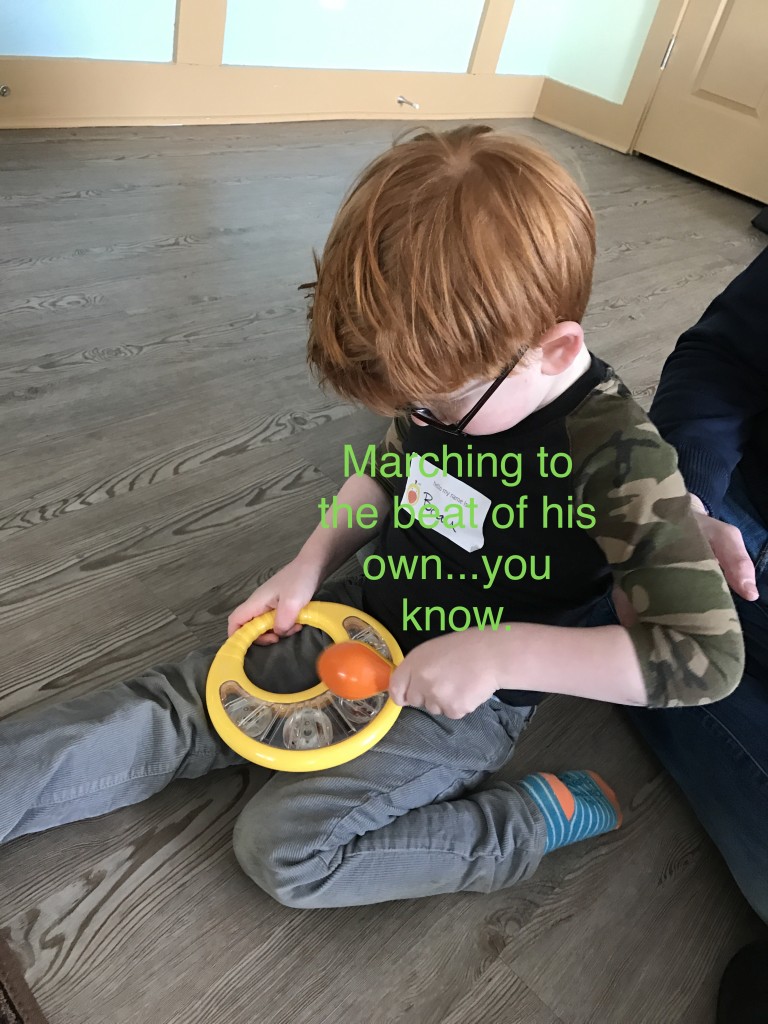 When it was time, Danny, the class’s lead teacher/band leader/guitar player/possessor of colorful STAR tattoos got everyone up on their feet and the kids (and their parents) started to dance. But they weren’t dancing to kid’s music. They started the set with Fleetwood Mac. And since we had just been listening to “What Makes You Think You’re the One” on our drive to class, my kids were totally psyched. See? That would be my son, on his feet and engaged. SCORE, Songs for Seeds! 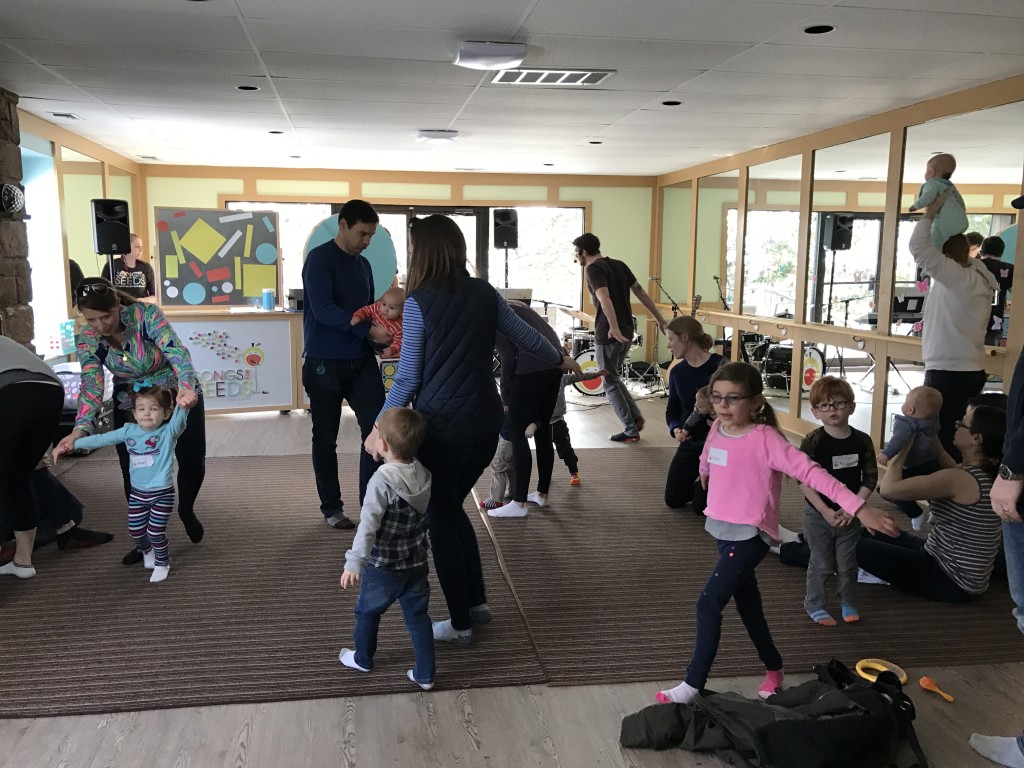 Then, I got to live my dream.

Fact #4: When I was a kid at Camp Saginaw my counselors, who were foreign, introduced me to this song. It was Bunk C’s jam.

And I think that I want to BE The Dancing Queen. And as we started to spin and twirl to the band’s rockin’ rendition, I realized that I had not yet exposed my daughter to this song! I guess if I claim the title of “Dancing Queen” then she can be “Tiny Dancer”. 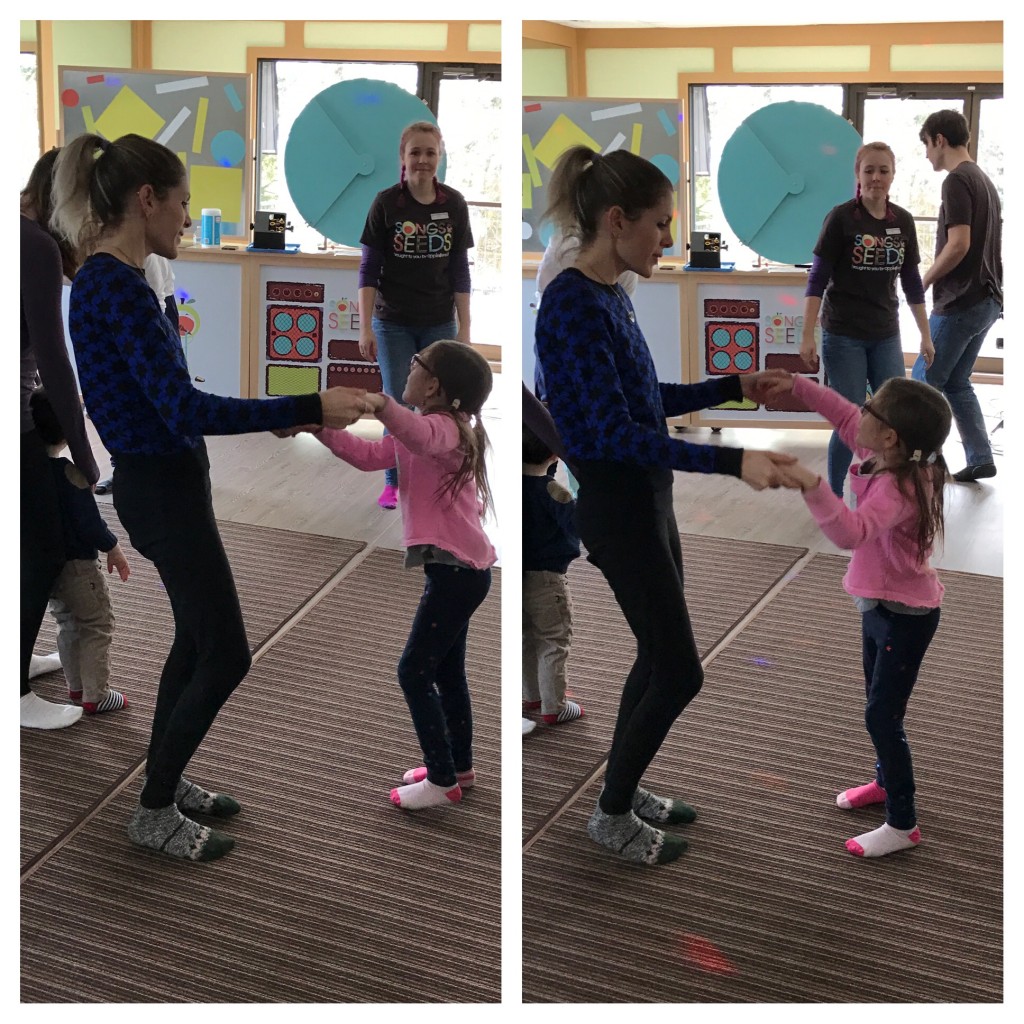 Soon thereafter Danny led the kids in a fun activity that allowed them to each have a shape and together, using each of their shapes, they would make a bus…

which would then segue into “Wheels on the Bus”. It’s funny, because I was so happy that they played that song. While I had obviously loved rocking out to the previous tunes, “Wheels on the Bus” allowed my son to hear something familiar, and it got him to sing along. He was totally into this, as well as his white rectangle magnet.

What I realized is this: Songs for Seeds is not gimmicky. They aren’t playing rock music just because it makes them stand out; rather, they are playing rock music because rock music is good and so it is good to expose our children to these quality tunes. But, they also keep the heart and soul of a kid’s music class, by giving them songs that they will know and to which they can sing along. A little bit familiar and a little bit out of the box. And they’ve mastered this combination exquisitely. 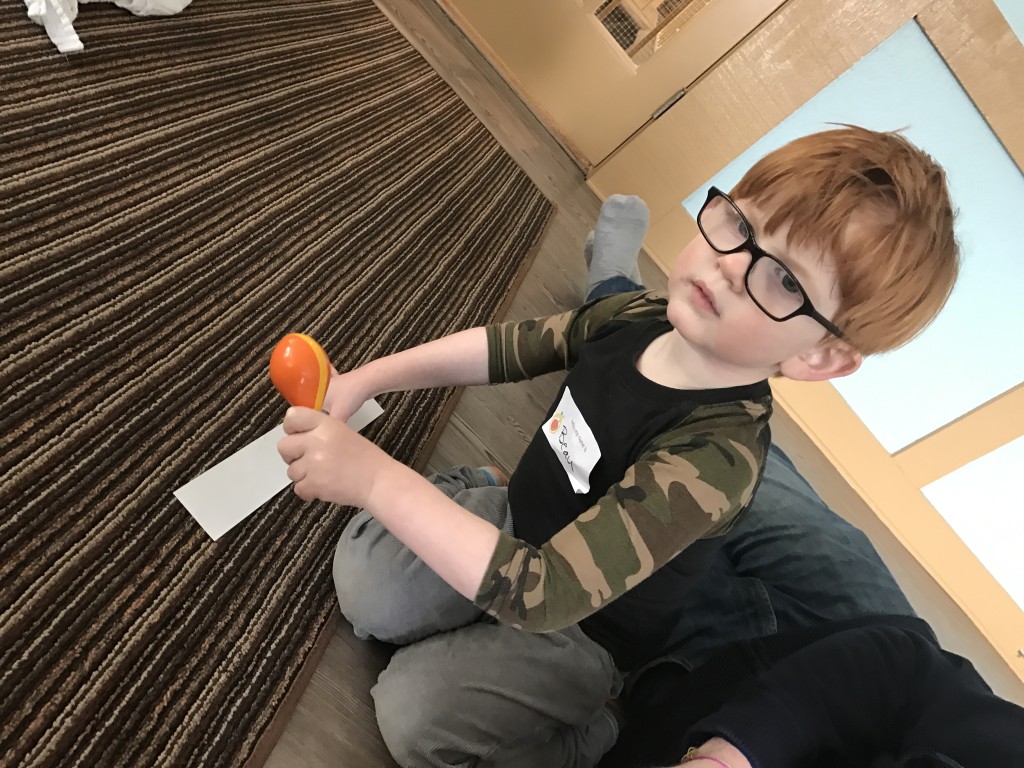 they brought out the scarves. 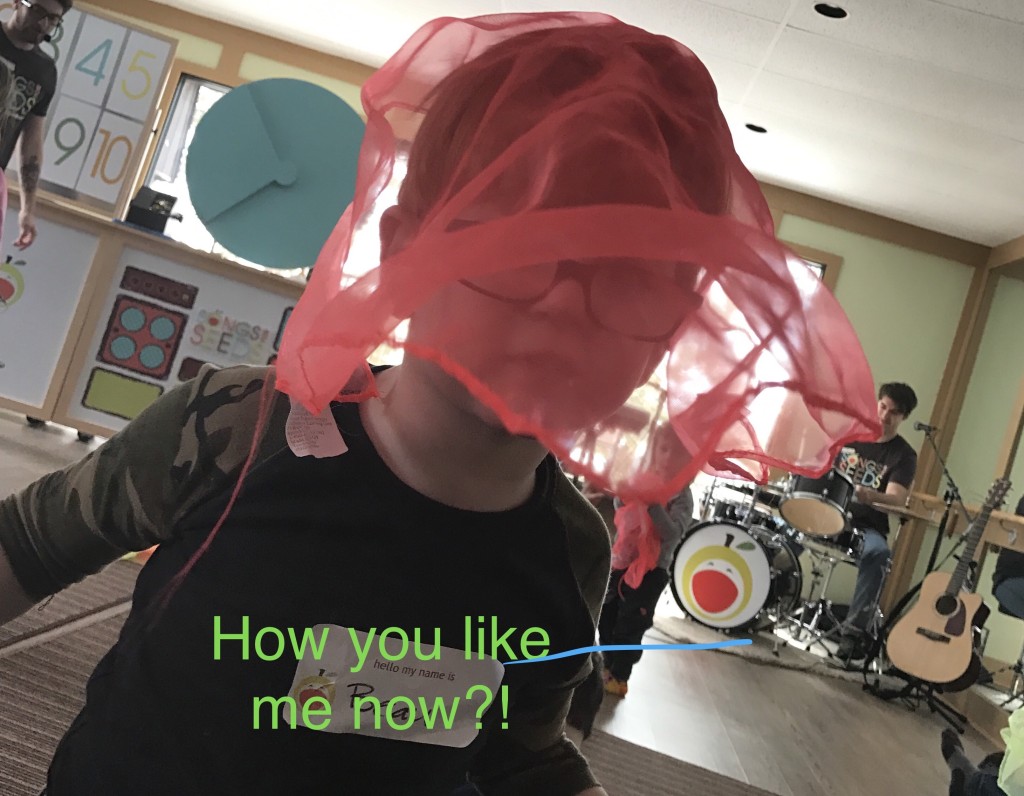 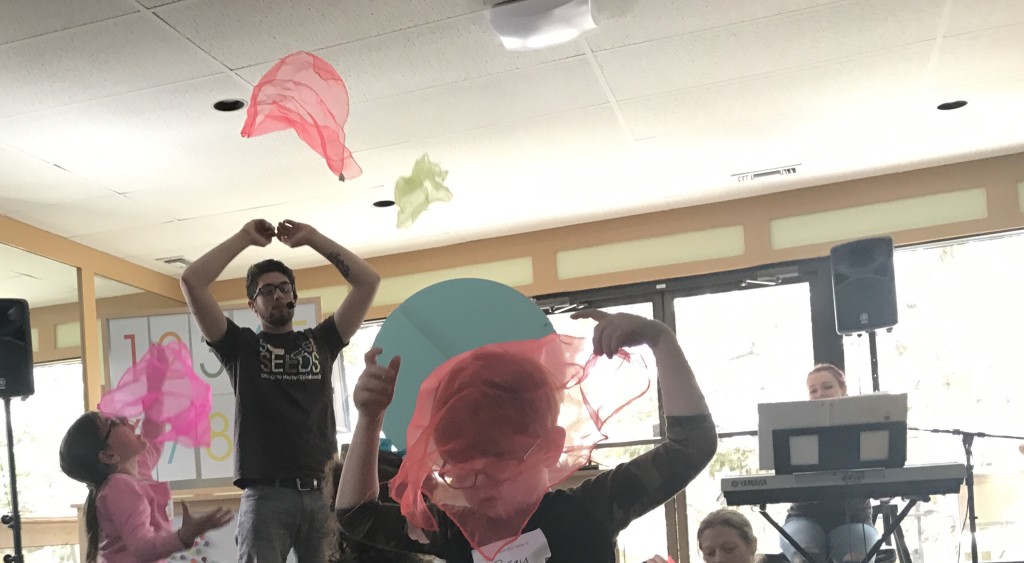 And an animal wheel.

After the 45 minutes of class was up, all of the kids (babies included) got a chance to play each of the instruments. The teachers were so kind and showed the kids how to handle the instruments with care, but also gave them the freedom to explore.

See? A natural! And so happy! 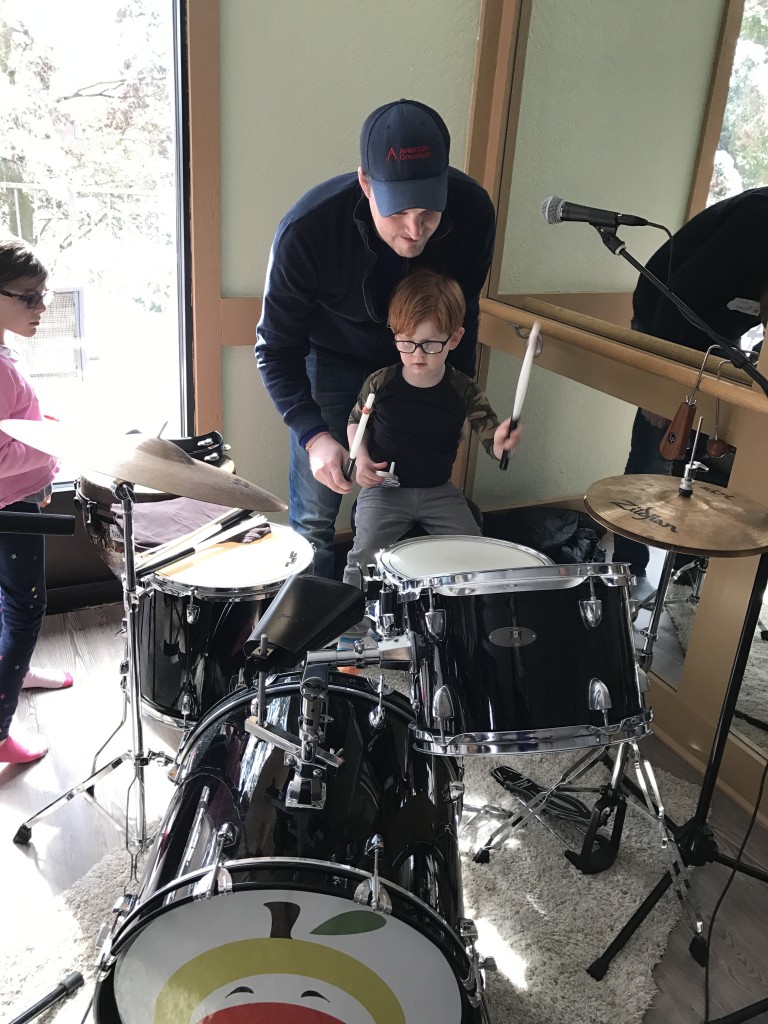 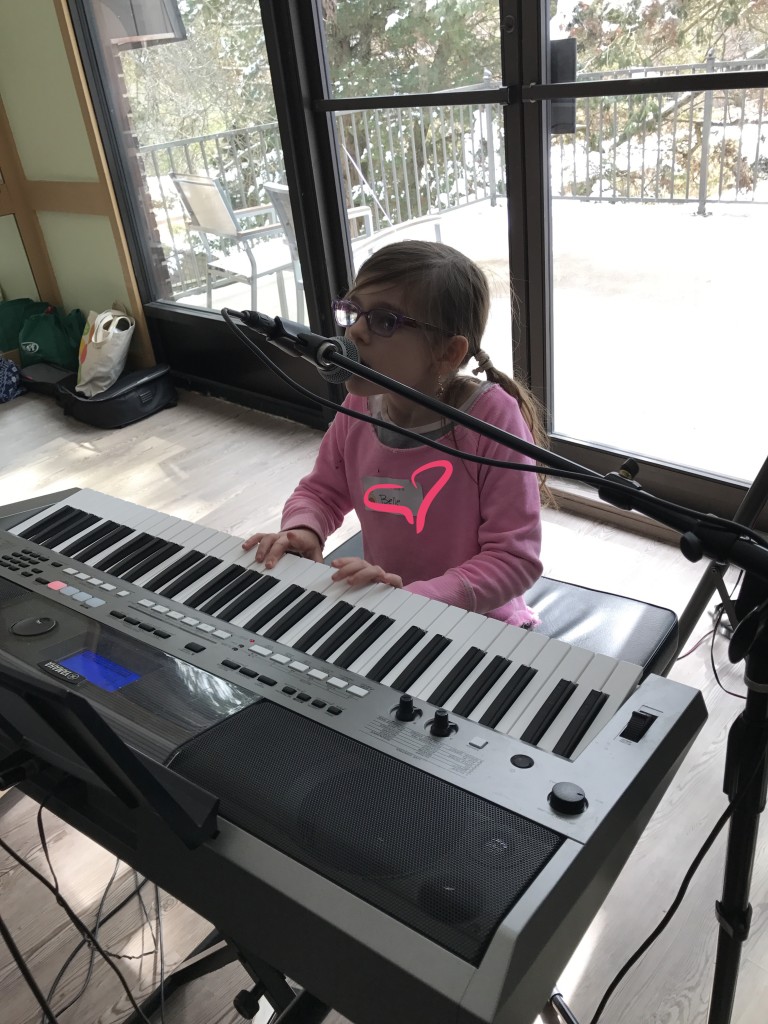 Fact #5: I used to play the drums. But, sadly, my teacher told me that “girls don’t play the drums” and so I quit. Obviously I regret this now for many reasons.

My love of percussion, though, has lived on and I have always been drawn to the drumming in songs. My first concert ever was “No Doubt” (shout out to my dad for taking me in 1996!) and I can remember listening to the “Tragic Kingdom” album and just hearing the drum part, drowning out, for me, Gwen Stefani’s soaring vocals. So this made me happy:

When we were done, my daughter asked when we could come back. And then my SON asked the same. They both had the best time, felt welcomed, adored the teachers and felt as though they were able to thoroughly rock out in a bright, warm space. Jill made us feel like VIPs, but I realized, everyone at Songs for Seeds in Wayne feels like a VIP. Why? Because they are.

One of the fringe benefits of our class experience at Songs for Seeds was unexpected and awesome: it made my husband and I feel like good, accomplished parents. By 11:30 on Saturday morning we had already given our kids this fun, comprehensive, unique experience. I will admit that we often struggle on the weekends, yearning for some chill time as a change of pace from our busy weeks, and this breeds #momguilt. #parentguilt. And so if we spend a day in our pajamas, even if we have done fun “at home” activities like “home diner” and “home movie theatre”, it still feels a bit lazy. Our time at Songs for Seeds made K and me feel like rock star parents, and not just because I am The Dancing Queen.

I am nothing if not genuine and I am also serious when it comes to two of the things that mean the most to me in this world: music and friends.

With Songs for Seeds, I have found both. Thank you, Jill, for giving us this experience. We cannot wait to come back.

You allowed my heart to feel full in a way that is not always the norm for me, and for that I am so grateful.

I left your class with a new appreciation for this fabulous music program. A closer bond with my new friend. The feeling of accomplishment as a parent.

And, none of those wooden sticks with the grooves. Because who wants those things, anyway?

This post was written in partnership with Songs for Seeds, Wayne. As always, all reviews & opinions are 100% honest & my own.