It only took one year of trying!

Exactly one year ago, I published this post entitled “I do not know how to toilet train my son.”

I swear that I wrote a follow-up post to the original, but I cannot seem to find it. I did, however, write a more recent post involving my son and the toilet, but it was less about potty training and more about a Play-Doh toy.

In any case, we have finally potty trained our boy. It is funny; he’s a really smart kid, but also incredibly stubborn, so his refusal to toilet train was less of a lack of actual readiness and more of a lack of wanting to do things on terms that were not his own.

Would you like to know how it ultimately ended up going down?

This past weekend I took off his diaper and put a pair of Paw Patrol underwear on his little body. And, once again, I sat him on his little potty seat and in order to get him to stay on, I did what he asked:

I told him scary stories.

My kids are obsessed with scary stories. But because my son is also scared of said scary stories, he dictates how he wants the story to go and the storyteller must oblige.

For example, he will say, “Tell me the scary story about when you go to Bubbie and Zeydie’s house and it’s really dark there…”

and I will say, “One night I drove in the dark to Bubbie and Zeydie’s house and when I got there all of the lights were off and it was very dark inside their house and I called out for them but no one answered. So, I went up to their room, and they were asleep!”

and then he will interrupt me and say,

and so I will say,

“Ok, so I was at Bubbie and Zeydie’s house and it was dark and I called out for them and I looked all over and I couldn’t find them so I called them on the cell phone and I realized that they were at work!”

And then he smiles.

He’s like this tiny, strawberry-blonde dictator, ordering me from his throne.

(And yes, there the pun was, indeed, intended.)

I DO know how to toilet train my son!

If you listened to the new podcast, about which I am so excited, first of all, thank you so much. Your feedback has been so awesome and I am humbled, as always. I appreciate you so much. Second, since I was speaking off the cuff, I shared that I had just driven my daughter to school that day in my robe and tie-dyed sweatpants from the childrens’ store, and so I prayed that I would not be late and have to walk her in.

Oh, but today, my friends. Today, it finally happened.

This morning was a hectic one, and we do not like hectic mornings around here. Do you remember the whole jingle jingle day?

That’s not how it works, evidently.

This morning, while rushing to get my son to school on time, I searched frantically for his glasses (which is a general theme on this blog and in my life) and could not find them anywhere. And not only did I have to pack a normal day’s worth of supplies for my son, but today I also had to pack his cozy blankets for rest time and outdoor gear and as many pairs of underpants as possible.

I finally gave up on the search efforts (I do not want to be a spelunker when I grow up) and loaded both kids into the car and despite the fact that we live directly across from his preschool, we were late.

And do you know what that means?

I had to walk him in.

I had to walk a kid into school while wearing my robe.

I am just so basic right now I don’t even know what to say.

So, I walked my son into school WITH:

my husband’s beanie on my head

my daughter (also in her nightgown, with jeans under it)

bags (in my arms and, I assume, under my eyes)

I walked my son into school WITHOUT:

Yesterday was a successful snow day in the land of mom. I worked and I played (major emphasis on the latter) and I hit all of the major “successful snow day” marks (which I talk about in Episode 2 of the podcast! I recorded it last night and I am so excited!)

I tried to take a photo with my kids 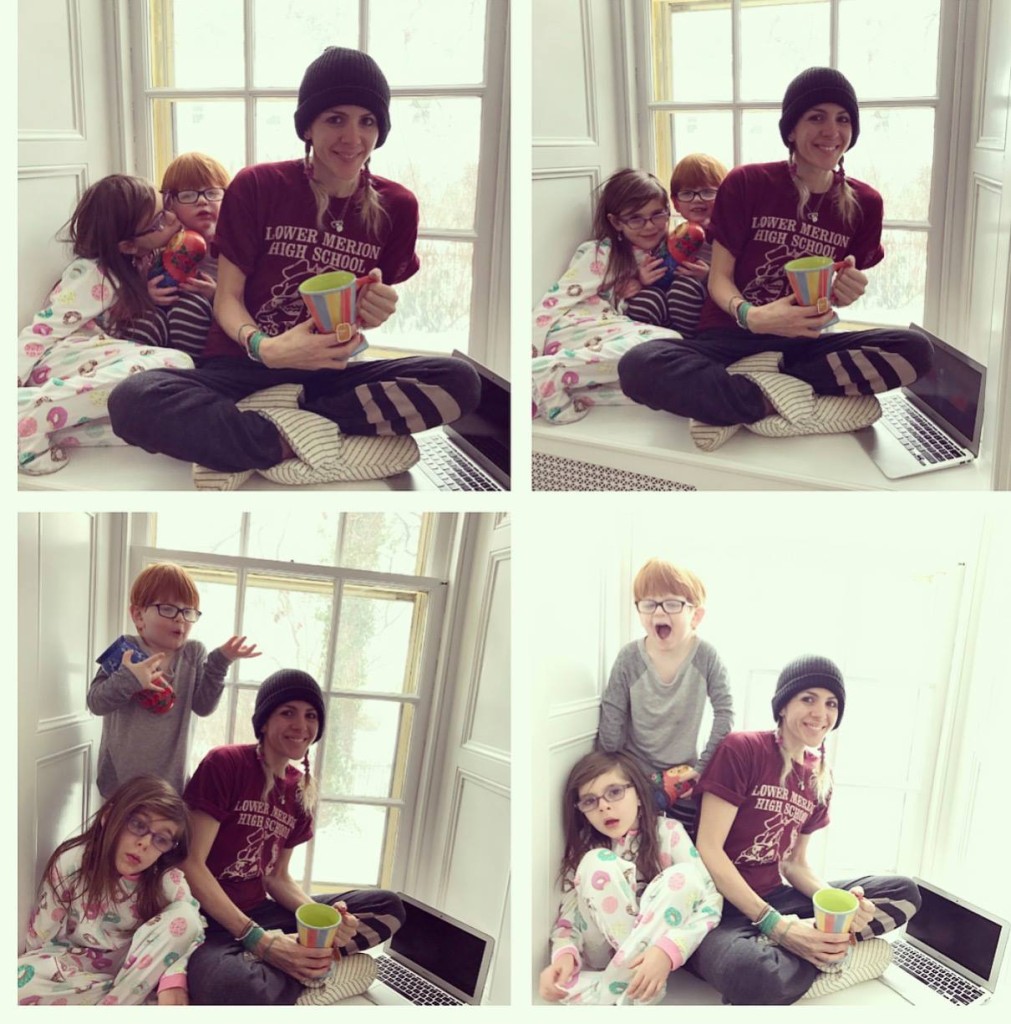 and ended up with my favorite video ever.

(Just know, if you decide to watch said video in the link above, I suggest you do so without a beverage in your mouth or a full bladder, as I have now watched it at least 20 times and I cannot stop laughing, just as hard as I was captured laughing in this video clip, if not harder. My son is my shy child, and so watching him dance like this–especially with the facial expressions–slays me!)

Last night, my daughter told me that I am the reason why her life is good, because I am “nice and loving and cuddly” (even though she later asked me if I would be sharing her sweet quote on social media; I am going to trust that she was being sincere).

So, I have done a lot since the last time I wrote, despite the fact that it has only been two days.

I got my kids to be completely obsessed with Fleetwood Mac (my daughter is walking around the house singing, “What makes you thing you’re the o-o-one”).

I jumped off of the swing into a huge pile of snow.

I did the preschool version of the “walk of shame”.

I learned that I DO know how to toilet train my son.