I have told you some funny stories about my son’s shenanigans.

First, there was the time that I called the pediatrician’s office, worried about a red rash on his stomach, only to find out that it was just the stain from the previous night’s cherry waterice.

Then, there was that fun time that I had to call Poison Control because he ate a candle.

Well, earlier this week I had another “fun” experience with my boy;

As I was upstairs getting dressed, I saw him sitting, mesmerized, at the bottom of our staircase. I kept an eye on him, not sure what was holding his attention, but I figured it was my daughter’s shoe that I could see on the landing (which, I realize, sounds ridiculous, but this is the kids whose favorite “toy” is the toilet. Toylet.)

In any case, a few minutes later when I finally made my way down the stairs, I saw what had really had him captivated: the lid for a container of Crazy Aaron’s Thinking Putty. And all I could think was, “Oh my god, my kid just swallowed a big ball of putty.”

Fortunately, I know the family that owns the company, so I was able to send them an email. It was something like this:

I shall quote it directly–

My son was captivated by something at the bottom of the stairs, and when I went to investigate I realized that “he had the lid to Crazy Aaron’s Thinking Putty in his hands. There was no bottom and no putty. I don’t THINK he ate the putty. That would be very very hard to eat, I imagine. I tried to smell his mouth and it didn’t smell like putty, but jesus christ, this kid is insane so who knows. My question is, is it poisonous?”

I was very relieved to hear that no, the putty is not, in fact, poisonous at all, and that companies that make products such as theirs have to go through dozens of safety tests. While the putty is not recommended for children under 3 years of age because it could pose a choking hazard, the only thing that could have possibly happened, I was told, is that his poop would be glow in the dark.

P.S. I don’t think he ate the putty, but still.

During our email exchange, Elizabeth, the wife of “Crazy Aaron” himself*, offered to send me some samples of their different products, including their exclusive new Valentine’s Day Putty. Now, here is the thing; Technically, this has now crossed over into the territory of what I refer to as a Product Review however, while Elizabeth sent me some new-t0-me products c/o the company, we have been fans of Crazy Aaron’s Thinking Putty for a long time now, having purchased it on multiple occasions. Obviously we had it in the house the day of the possible ingestion, and my daughter loves to play with it (although she can’t pronounce the word correctly and says it like it rhymes with “Goody” or has the same beginning sound as “Pudding”). You catch me?

*Aaron and Elizabeth have been together since she was 13 and he was 15; he was at her Bat-Mitzvah. They are the cutest and she is one of the most entertaining people to follow on Facebook, I die over her updates.

When I told my husband about the incident with our son, he couldn’t have cared less about the frantic email, he was super stoked about the connection to the Thinking Putty, as he has it as his desk and uses it every single day as a stress relief tool. He is obsessed.

So yesterday, when the box arrived, I texted him this picture and this was his reply: 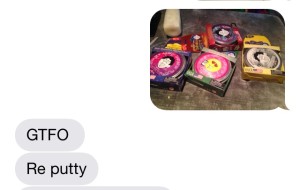 It was also the first thing he mentioned when he got home last night. Just sayin’.

So we were lucky enough to receive this awesome assortment:

They are all extremely cool and trust me, they were all enjoyed, but the real star of the show is their new Valentine’s Day Putty, called #BAE. From the website: “Crazy Aaron texted his BAE and came up with this gorgeous new limited edition color of Thinking Putty for Valentine’s Day! #BAE is a bright, frosty pink Thinking Putty that will set your Valentine’s heart aglow! Turn out the lights to enjoy its pink glow. Flip them back on and the shimmery pink sparkles will delight your eyes! Tell your BAE that you want some #BAE for Valentine’s Day this year, Before Anything Else!”

I will admit, the pink, sparkly putty really is gorgeous. It is totally shimmery, as described, and it is basically my daughter’s dream come true. She has played with it since I allowed her to open it, including surreptitiously during our meals. 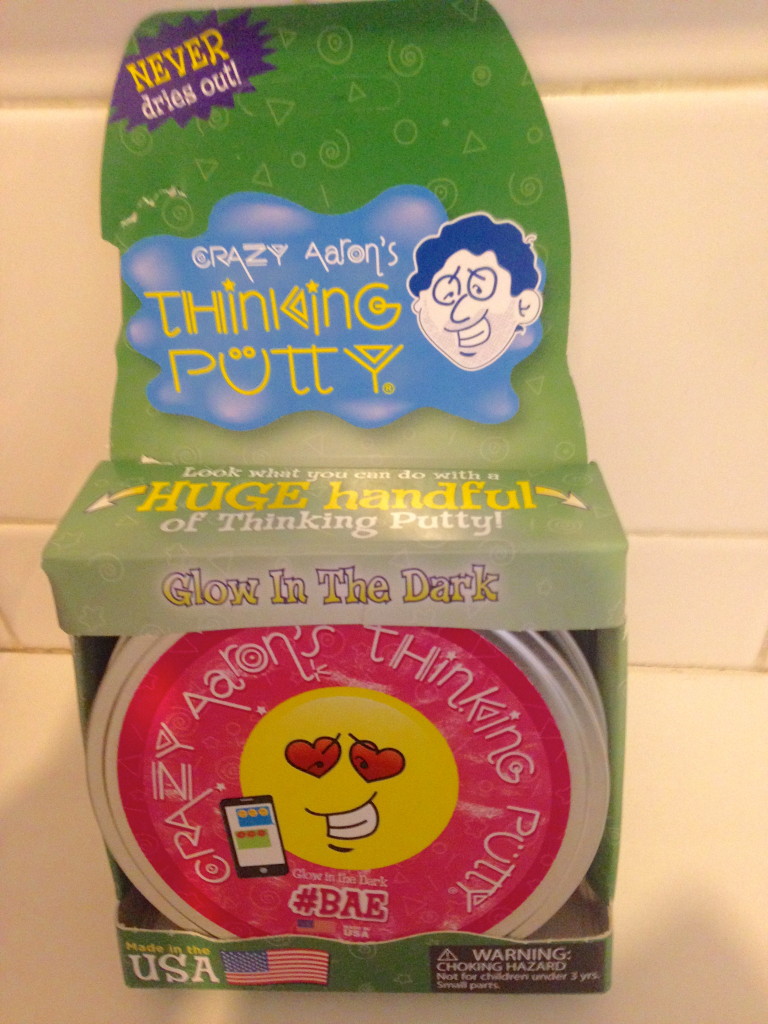 But I have to admit something; I read the description and I got the concept, but one thing alluded me: What was #BAE? I looked it up online, I searched Urban Dictionary (NOT HELPFUL IN THIS CASE) and then finally had to admit to Elizabeth that I am not, in fact, cool enough to know the meaning of that hashtag abbreviation. She explained to me that it’s an internet saying that basically implies that your #BAE is your number 1, before anything else. “

“We listen to the heartbeat of today’s youth,” she told me. Which is why I love her. See? She’s so freakin’ funny.

When my husband got home from work, before even taking a bite of food or changing his clothing, this happened: 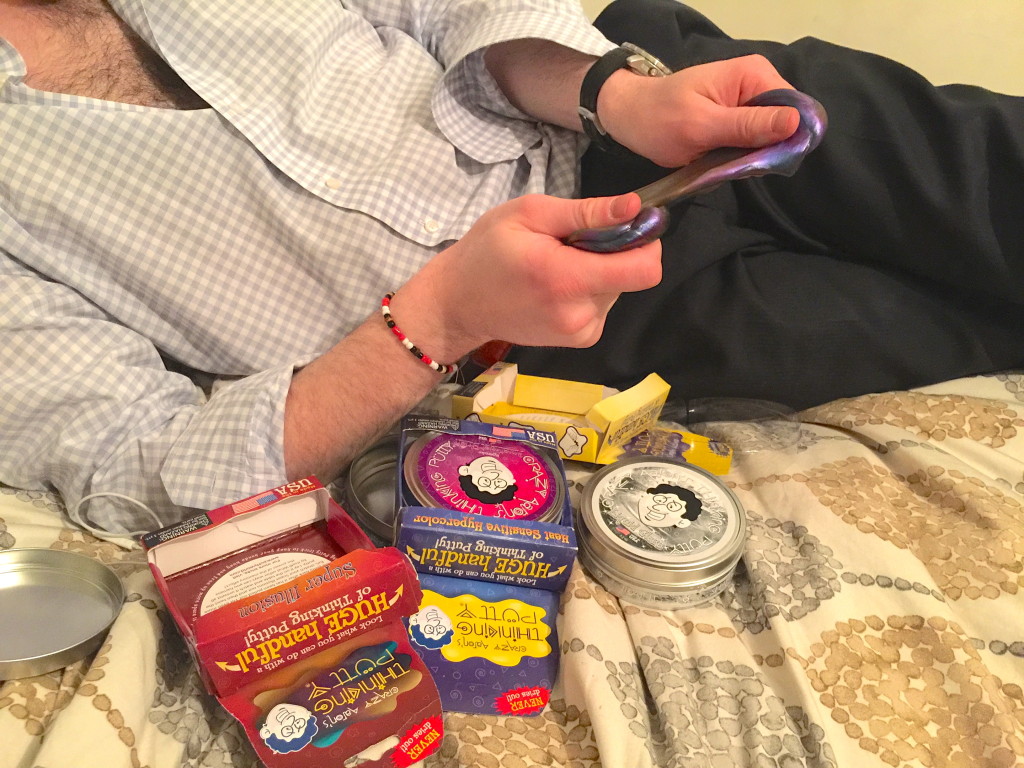 Isn’t that gorgeous? It is like the color I want everything to be, in putty form.

Now for more of the facts about the company and the product.  As I mentioned before, Thinking Putty is recommended for ages three and older (because of the aforementioned choking hazard). The product is non toxic and proudly made in the USA. They recommend playing with Thinking Putty on a non porous surface, such as a table or counter top. If left to sit on porous surfaces such as carpeting or upholstery, Thinking Putty will melt and adhere to the fabric. (This would not go over well with me.)

Thinking Putty likes to live in its tin when not in use. This will keep your Thinking Putty safely contained and protected from dust and debris. Apparently we missed this instruction as our original, small, glow-in-the-dark was of putty is not in it’s tin home, nor, my son’s digestive tract (we hope).

(Helpful tip: In case you do end up with Thinking Putty stuck in clothes, furniture, carpeting, here is the company’s advice on cleaning most surfaces: http://www.puttyworld.com/faq.html#Q9)
So, if you are in the market for a tactile way to relieve stress and exercise your hand (as an adult) or want to show a kid a good time, I would highly recommend this product, sold here and in retail stores all over.
You know I would never steer you wrong. Y’all are my #BAE.
By Rebecca Fox Starr Thursday, January 15, 2015 0 Crazy Kids, Uncategorized #bae, adult putty, Crazy Aaron's Putty World, crazy aaron's thinking putty, crazy aaron's thinking putty and my crazy son Permalink