As humans, we are often told to listen to our hearts.

We are told to pay attention to our “inner voice” and that its words should reign supreme over all else.

There is an actual movement surrounding a greater effort to pay attention to our feelings, and while this is something that I would ordinarily get behind (and, in some ways, I do), it is also scary for me.

It is scary AF.

You see, I do not like the idea of “intuition.”

This might surprise you, seeing as I am one of the more superstitious you will meet, and those things seem to correlate, as they imply a certain amount of control that we, as humans, either try to or think we have.

No form of intuition, however, scares me more than the one that involves the thing that was given to me when I first became pregnant with my daughter; the thing that grew, along with my belly, instead of the third arm that would have been SO MUCH MORE HELPFUL!

Why is the idea of the mommy gut so scary to me, you ask? Because it can be loud, or it can be quiet, but it is not always right, and it is impacted by both anxiety AND data, and, most of all, because I do not know when it is right, so I do not know when to (or not to) listen.

And that is terrifying.

You might be aware of the fact that I recently wrote a book about prenatal and postpartum anxiety, among other things. In it, I tell the story of the night my daughter was born, and how, had I not listened to my “mommy gut” and gone back to the hospital to have her checked, and had I not insisted on an unplanned c-section that evening…

I cannot even bear to complete that sentence.

But, before that night, when I was around my sixth month of pregnancy, I remember, so vividly, my first experience with the notion of the mommy gut and how, though intended to provide me with comfort, it filled me with utter anxiety. It was a cold day on the playground at the school where I was teaching. I was supervising my class on the jungle-gym and having some small talk with some of my colleagues. As they were all mothers, I decided to turn to them with something that I was chewing over in my mind.

“Hey, can I ask a question?” I opened up to my friends. “I haven’t felt the baby kick as much this morning. But, there are times when babies are more active and then times when they are less active, right?”

And that is when it happened. One incredibly kind, well-meaning colleague said, “You have a mother’s intuition so just listen to what your gut tells you. You’ll know if something is wrong.”

That scared the shit out of me. Let’s say I didn’t listen? Let’s say I missed something? Let’s say I listened all the times, but then the one time when I should have listened I said to myself, “Ok, calm down, all of those other times you freaked out and it was nothing, so I am sure this is nothing, too…”

…because there is so much anxiety swirling around in any and all of these situations and it makes it very hard to determine the difference between “mommy gut” and fear.

On February 3, the day before THE SUPERBOWL, my daughter woke up with a fever and dry cough. She had been complaining the day before of a headache and dizziness. But, the thing is, my daughter complains a lot. When I pick her up from school, I ask, “How was the nurse, today?” as a running joke, because it’s always something.

But, as soon as she woke up that Saturday morning, with no other symptoms than those that I shared above, I knew she had the flu. No one in her class had it. She had been vaccinated. But I just knew.

And when the nasal swab thing tested positive for Influenza Type B I felt simultaneous relief and dread.

I was not scared because she was sick. I was scared because I had a feeling that something was wrong with her and that feeling turned out to be correct. BUT, I get scary feelings a lot of the time. So does that mean that they are all going to come true?

She was home sick for over a week with the flu, and we spent a ton of time cuddling, got the Tamiflu administration down to a science (I told her that her bite of a roll and sip of orange juice before and after her shot of Tamiflu was similar to something I would teach her in 13 years, but that it would involve salt and a lime!!!) and, a few days later when her brother and I also got sick, we decided to just camp out and home and ride it out.

However, there was a little complication. We were supposed to leave on February 10 for a tropical vacation. This would have been one week after her diagnosis, 4 days after my son’s and just too soon and too scary, for me. My daughter had been counting down to this trip for months, sending daily text messages with my dad with the number of days shrinking from 100 to 30 to 11 to 4. She was sick, and not getting worse, but not really getting better, and I had an incredibly hard decision to make. Could I put my kids on an airplane, so that they could breathe in recycled air, breathe out air that could be germ-filled, possibly with fluid in their ears, only to be on an active vacation that they were far too run down to enjoy, and away from medical care that I knew and trusted?

I wrestled with this decision and it was brutal. I tried, desperately, to do what was right, and not just what was safe. I worked to tease apart my anxieties about traveling in general from the actual facts of the situation. Was it reasonable to cancel a trip, disappointing my children, because of the flu? Certainly. Was it the right call? That was for me to decide and I was told, over and over, to listen to my mommy gut.

Something about the trip just did not feel right. I could not put my finger on it, but there was something wrong.

After a lot of deliberation and a large amount of sneezed-in tissues, I made the final call. 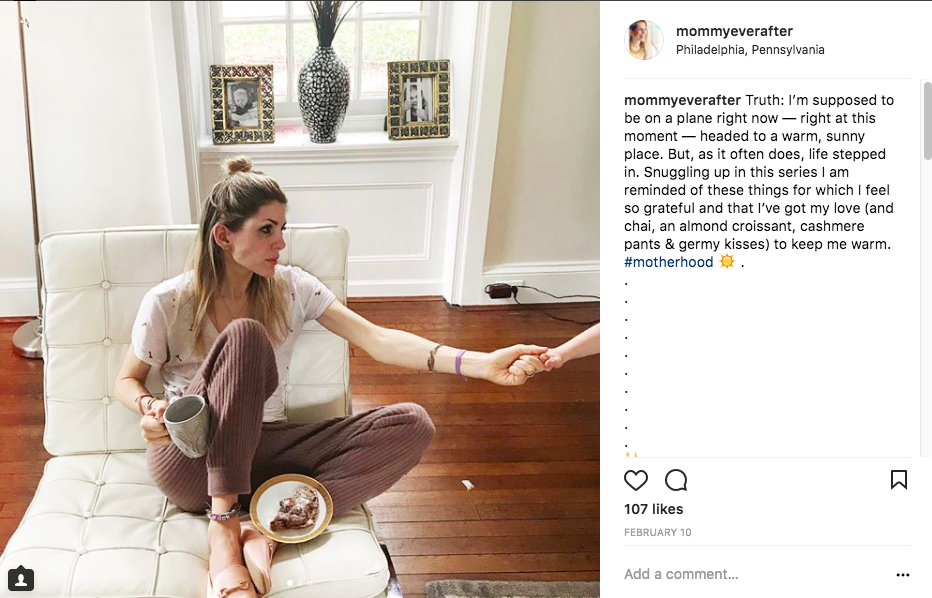 I still asked everyone I knew if they thought I had made the right choice.

Now, days after we would have returned, after some additional, unexpected life circumstances came up, not limited to a bout of pink eye and some additional sickness-related-symptoms, I am completely confident in the decision we made to cancel the trip (and, instead, had the best time ever in the Poconos, but I’ll go into that, later).

The night before we were supposed to go, I shared this on my Instagram. It was the right call.

But was it because my “mommy gut” informed my decision, or because I listened to my human brain?

That is a rhetorical question.

Here is the real truth. In thinking of the instances in which I used that mommy gut, I can point to many circumstances in which my instinct was correct, despite what others, including professionals, were telling me.

Like the time that my daughter was so sick that she could not stop sleeping and would not eat or drink, but the doctor said it was not, in fact, strep. I knew it was strep. I brought her back in the next day, after a whole extra day of suffering and, what do you know, the first test had been set inaccurately, giving her a false negative. She had strep.

I knew it all along.

Or the other time I knew she had strep, just a year ago, and was told over the phone and upon examination that it was not strep. “BUT, oh we will just test her anyway to make you feel better…”

…it was strep. Again.

I knew it all along.

The examples above can be chalked up to the mommy gut thing, or they can simply be, “I know my kid well. I know that this is what she looks like when she has strep. I have data, because I have been her mom for almost 8 years.”

IT IS SO HARD TO RECONCILE.

Today, more than ever, we are reminded of just how scary it is to be a parent. I mean, it is scary to be a person, but, in the context of this post, and with what has gone on in our country in the past 8 days, it feels scarier than before. Every day, I have to kiss my kids goodbye, send them to school, and I hope and pray that they are kept safe while they are not with me. I hope that they don’t fall down the stairs or cut themselves or…

I cannot even bear to complete that sentence. Once again.

I wish this were a post that could be wrapped up and presented in a tidy bow, with some revelation or kernel of wisdom at the end. The truth is, it is more of a diary entry than anything else; more of me working out my feelings, but this time on the computer screen and not just in the confines of my own mind. If I feel this way, and if I fear the mommy gut, others must, as well. Right?

Or, am I doing something wrong?

Is there some magical answer of when to listen and when to say, “Ok, shush, I have an episode of Grey’s to finish,” because if there is, please tell me.

But, the answer cannot be, “You will just know.”

Thoughts and feelings are two different things. They are completely different. But, what I have learned is that they are sneaky little buggers, and they can, so often, masquerade as the other. As I try to remind myself, there is no correlation between the amount I believe that something is true and the actual truth. So often, we invent stories, and convince ourselves that they are true and the line between thoughts and feelings (and anxieties) continues to blur.

Yes, I have been able to accurately diagnose my daughter with ailments several times. But, what I did not mention is that there have been countless other times when I have taken her to the doctor and her ears were not filled with fluid and her rash was not whatever scary rash I had pulled up a photo of from Google Images. We just don’t remember those times — the times when we are wrong — as often as we cling to the times when we are right.

Because the latter? They swirl around, together, and feed off of one another, and make nice little homes in our bodies. Right in the spot where I can feel my anxiety physiologically; where I somaticize my woes.

Or, to call it by another name, in my gut.